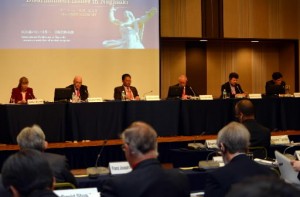 The United Nations Conference on Nuclear Disarmament Issues opened a two-day meeting on December 12 in the city of Nagasaki to explore a path toward the total elimination of nuclear weapons. The conference, which is organized by the United Nations and Japan’s Foreign Ministry, is being attended by some 60 government officials and experts from approximately 20 countries and international organizations. On the first day of the two-day talks, officials from the non-nuclear states, which are promoting a nuclear ban treaty, engaged in heated discussion with their counterparts from the nuclear weapon states over negotiations to establish the treaty, with those negotiations expected to start next March.

The U.N. disarmament conference has been held for two years in a row in the A-bombed cities, with the last meeting held in Hiroshima. It is the third time after an 18-year interval that the meeting is being held in Nagasaki. Under the theme of “approaching nuclear disarmament,” the issues were discussed by representatives from six countries.

Franz Kuglitsch, the head of Austria’s Department for Disarmament, Arms Control and Non-Proliferation, who has spearheaded the U.N. resolution on nuclear ban treaty negotiations, stressed that the gulf between the nuclear states and non-nuclear states can be bridged if the nuclear states will join the discussion with priority placed on the inhumane consequences of nuclear weapons. However, Jennie Gromoll, the Senior Advisor for the International Security and Nonproliferation Bureau at the U.S. Department of the State, who opposes the resolution, refuted Mr. Kuglitsch’s idea by saying that it is highly likely international security would be undermined if the idea of banning nuclear weapons advances without considering the fact that nuclear deterrence helps keep the world in a state of peace. The other participants also expressed their opinions from their perspectives.

On December 13, the participants will discuss issues involving nuclear-weapon-free zones.

On the sidelines of the disarmament conference, a “Youth Communicators for a World without Nuclear Weapons” forum was held by Japan’s Foreign Ministry on December 11 at Nagasaki University. High school students from Hiroshima, Nagasaki, and the United States shared ideas for pressing the Japanese government to withdraw the nation from the nuclear umbrella provided by the United States and make a positive contribution to the launch of negotiations over a nuclear ban treaty.

The students also spoke with Yoji Yamada, the director of the film “Living with My Mother” which is based on the atomic bombing of Nagasaki, and Sayuri Yoshinaga, the Japanese actress featured in the movie. Ms. Yoshinaga encouraged the students by saying that she hopes young people all over the world will unite as one to promote the elimination of nuclear weapons and that the day when there are no nuclear weapons left on the earth will come as soon as possible.

United Nations Conference on Disarmament Issues
The U.N. Conference on Disarmament Issues is a conference where government officials, researchers, and non-profit organization (NGO) members from each country discuss issues involving nuclear disarmament and related matters. It is co-organized by the United Nations and the Japanese government. The conference was initially proposed in 1988 by Noboru Takeshita, then prime minister of Japan, at the United Nations Special Session on Disarmament, and its first meeting was held in Kyoto in 1989. Since then, the conference has been held almost every year in various cities in Japan, including Hiroshima and Nagasaki. This year’s gathering is the 26th such meeting. As a rule, each participant expresses their views as an individual, and no resolution or declaration is adopted at the conference.