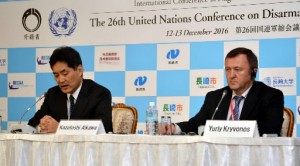 The United Nations Conference on Disarmament Issues, held in Nagasaki, ended on December 13 after discussing three different themes including prospects for the 2020 Review Conference of the Parties to the Treaty on the Non-proliferation of Nuclear Weapons (NPT). The conference confirmed such issues as the importance of building trust between the nuclear superpowers, the United States and Russia, for making headway in nuclear disarmament.

In the session to discuss the NPT Review Conference, a gathering held every five years where member countries discuss measures for nuclear disarmament, Daryl Kimball, the Executive Director of the Arms Control Association, stressed that as success at the 2020 NPT Review Conference depends on easing tensions between the United States and Russia, it is important that U.S. President-elect Donald Trump and Russian President Vladimir Putin be urged to talk together about nuclear arms reduction. Emilia Sidorova, the First Secretary of the Department for Non-Proliferation and Arms Control of the Russian Ministry of Foreign Affairs, also emphasized the importance of the relationship between the United States and Russia.

Meanwhile, following the first day of discussions, the participants in the remaining sessions talked about the upcoming negotiations for establishing a nuclear ban treaty, which are expected to start next March. The representatives of Nagasaki A-bomb survivors and participants from the International Committee of the Red Cross (ICRC) called for the establishment of a treaty that would ban nuclear arms because of the inhumane consequences of these weapons.

There were also many calls for the Japanese government to become actively involved in nuclear disarmament negotiations. In response, Kazutoshi Aikawa, the Director-General of the Disarmament, Non-Proliferation and Science Department of Japan’s Ministry of Foreign Affairs, told reporters after the close of the conference that nuclear disarmament should be pushed forward by discussing the issues step by step and with security in mind.

The U.N. Conference on Disarmament Issues is co-organized by the United Nations and the Foreign Ministry of Japan. This is the third time in 18 years that the conference has been held in Nagasaki. Some 60 diplomats and experts from approximately 20 countries and international organizations attended the conference.