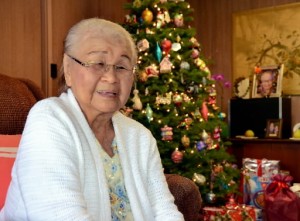 The attack on Pearl Harbor by Japan changed the fate of Japanese-Americans there. Kazue Ueda, a resident of Honolulu, will turn 100 years old next year. Ms. Ueda is a second-generation Japanese-American, her parents having immigrated to Hawaii from Hiroshima. When the war broke out, Ms. Ueda’s father was sent to an internment camp then experienced the atomic bombing in Hiroshima. He was aboard one of the ships involved in exchanging detainees held by Japan and the United States. The family assets were seized as well. Ms. Ueda hopes that the world can be a place where the happiness of families is protected. With this prayer in her heart, she has been anticipating Prime Minister Shinzo Abe’s visit to Pearl Harbor.

Ms. Ueda’s home, located in a suburb of Honolulu, is decorated with a Christmas tree. When asked about the prime minister’s visit, she responded in fluent Japanese by saying, “It’s a very good thing.” She went on, “I hope that Japan and the U.S. will continue their good relationship, because it’s ordinary people who suffer when there is conflict between governments.”

On December 7, 1941 (December 8 in Japan), Ms. Ueda was working at the shop run by her father. Arranging toys and other items for the coming Christmas, she saw that hubbub had broken out around her. Neighbors, who had observed a swarm of Japanese military planes in the sky that morning, were expressing their concern. Ms. Ueda recalled, “At the shop, though, we were saying it might be just a drill. But by the end of the day my father was arrested.” From that moment, Ms. Ueda was unable to see her father, who was taken away by two men right before her eyes.

Ms. Ueda’s father was originally from the Koi district (now part of Nishi Ward, Hiroshima). After graduating from junior high school, he went to the United States and worked hard selling carpentry tools and other goods. He sometimes kept his shop open from 7 a.m. to 12 midnight and saved as much money as he could for his children’s education and other purposes. In 1932, Ms. Ueda returned to Japan and attended Hiroshima Jogakuin, a girls’ school. Then she went back to the United States to help with her father’s business.

Ms. Ueda said, “Although Japanese-Americans had been working hard, all our assets were taken away.” Because her mother had already passed away, prior to her father being detained, she and her three younger siblings sought to protect the shop. But it was confiscated. “We were considered enemy aliens then and we had no choice but to endure the situation,” she said. “But it’s true that Japanese-Americans in Hawaii had it better than on the mainland.” Ms. Ueda went on to explain that, while Japanese-Americans on the U.S. mainland were all forcefully detained, whether men or women, young or old, in Hawaii those targeted for detention were limited to the likes of business owners and educators.

Ms. Ueda got married in 1943. Her father was unable to witness her proud moment, traveling on an exchange ship to the Koi district in Hiroshima, where his mother lived. Then, when the United States attacked Hiroshima with the atomic bomb on August 6, 1945, her father was there at home. Ms. Ueda said, “I heard that he wasn’t injured, because the location of the house shielded it from the blast.” With her father’s plight on her mind, she sent packages to him after the war ended. “I wasn’t the only one,” she said. “Every Japanese-American was sending packages to their relatives in Japan. People there were very happy to get sugar, in particular.”

In 1957, she finally visited Koi to reunite with her father. It was the first time she had seen him in 16 years.

Outliving her husband, Ms. Ueda now lives with her elder daughter and grandchildren. She said that she and her relatives will enjoy special meals over the New Year’s holiday. “I hope these days of peace will continue,” she said. Fully aware, from her own experience, of the consequences of war, this desire is heartfelt. “I hear that Japan is having problems with Russia and China,” she said, considering the state of her second homeland. “I hope these problems won’t grow any bigger.”