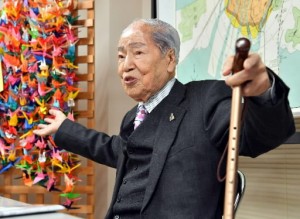 On December 28, A-bomb survivors commented favorably on Prime Minister Shinzo Abe’s visit to Pearl Harbor in Hawaii, calling this trip a future-oriented move. At the same, they expressed disappointment that Mr. Abe did not offer an apology for the Pearl Harbor attack. In addition, other survivors urged both Japanese and American leaders to work to ensure that war is never waged again and that all nuclear weapons are abolished.

In an interview with reporters in Naka Ward, Hiroshima, Sunao Tsuboi, 91, chair of the Hiroshima Prefectural Confederation of A-bomb Sufferers Organizations (Hidankyo) and one of the survivors who exchanged words with U.S. President Barack Obama during his visit to Hiroshima in May 2016, said that neither speech made by the two leaders mentioned an apology or the abolition of nuclear arms. Despite that, Mr. Tsuboi felt favorably about their statements, saying that both leaders did the best they could given current conditions in the world. He went on by saying that there is a positive mood for reconciliation between the two countries though this remains a challenge to fulfill.

When Mr. Tsuboi visited Pearl Harbor in 1997, he spoke with residents there. As a result of this experience, he believes strongly that, regardless of race and ethnicity, human beings can understand one another as long as they recognize the preciousness of life itself. Mr. Tsuboi also urged Mr. Abe to visit the Asian nations that suffered badly as a result of Japan’s actions during World War II and offer his condolences.

Kunihiko Sakuma, 72, the chair of the other Hiroshima Prefectural Confederation of A-bomb Sufferers Organizations, said, “Prime Minister Abe should have made an apology for waging the Pacific War. If he doesn’t talk about how the war started, reconciliation between the two countries will not be achieved.” Mr. Sakuma also had critical words concerning the fact that both the Japanese and U.S. governments are opposed to the idea of establishing a nuclear ban treaty, for which negotiations will start at the United Nations in March, and said that Japan should lead these treaty negotiations if it truly vows never to again wage war.