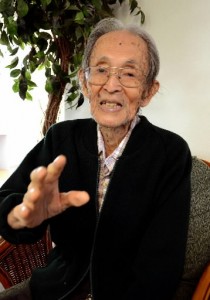 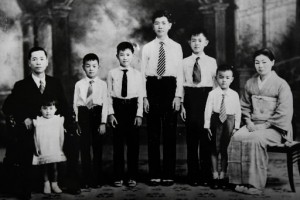 HONOLULU—Minoru Iwatake, 92, a second-generation Japanese-American who was born in Hawaii and experienced military service in both Japan and the United States, said firmly, “The war we had was wrong.” In 1941, when Mr. Iwatake crossed the Pacific Ocean and attended school in Japan, the war between Japan and the United States broke out, and he was drafted by the Japanese army. He was compelled to fight against his homeland, and his younger brother was killed in the atomic bombing. After returning to Hawaii, he encountered discrimination because of his ethnic background as a Japanese-American, and he volunteered to serve with U.S. forces. On December 28, Japan time, he will listen to the leaders of both nations speak at Pearl Harbor, the place where the war erupted.

“I used to live in Shinonome, which is written as ‘east cloud’ in Chinese characters. I remember the good old days there,” Mr. Iwatake said with a smile at a nursing home in Maui when asked about his memories of his time in Hiroshima. He was the second son of six children and in 1940, after his father, an immigrant to Maui, was killed in an accident at sea, he moved to the Shinonome district (now part of Minami Ward, Hiroshima) to be with relatives.

His memories of Japan were not always positive. He chafed at the military-style education in the school system. Recalling the moment he learned of the attack on Pearl Harbor, he said, “I thought it was a really reckless act, because I knew the U.S. was very powerful.” However, after he entered Meiji University in 1944, he was drafted by the Japanese military and sent to Manchuria (now the northeast region of China). The border guard unit he belonged to at the time was almost annihilated. He was able to swim away in a river, enter Korea, and head southward through the mountains. He then managed to return to Japan in the winter after the war ended.

At that point, Mr. Iwatake found out that his younger brother, Takashi, 13 at the time and a first-year student at First Hiroshima Prefectural Junior High School (now Kokutaiji High School), had been killed in the atomic bombing. Takashi’s remains were found at the spot where the school building had stood (now part of Naka Ward). “The United States made a mistake, too,” he said. “I want to ask why they had to kill civilians.”

After the war, his family pursued separate paths. Nobuaki, his elder brother who also served as a Japanese soldier during the war, stayed in Japan and worked for the U.S. Embassy in Japan. He died in 2012 at the age of 88. Mr. Iwatake and his two younger brothers, who also survived the war, returned to the United States. He said that he respected his parents’ hometown in Japan but he was American, after all, and that democratic values were important to him.

However, back in Hawaii, he faced discrimination first-hand because of his ethnic background as a Japanese-American. To demonstrate his loyalty to the nation, he volunteered to become an American soldier. During the Korean War, he sought to serve on the front lines, but the military had him teach Japanese as an instructor. He left the military after the ceasefire, and became a civilian employee in the U.S. Navy.

In May of 2016, Nobuaki’s wife and child were invited to a ceremony which took place in Hiroshima when U.S. President Barack Obama paid a visit to the city. Mr. Iwatake welcomes the recent travels by the leaders of the United States and Japan. From the perspective of security in Asia, he said that Japan must cooperate more with the United States. Meanwhile, as a family member of an A-bomb victim, he feels strongly that “The fallout from the atomic bomb may affect the health of survivors for decades. The issue of nuclear weapons is a big problem, but I think it would be better if they were abolished.” In honor of his late younger brother, he named his eldest son Brian Takashi.

After enduring many hardships, Mr. Iwatake now hopes that Japan feels true regret over the things it did in the past. He said, “I’d like Prime Minister Abe to acknowledge the mistakes that Japan has made and pledge to help create a better world.” This is his heart’s desire as a Japanese-American who has been buffeted between these two nations.