The Key to a World without Nuclear Weapons, Part 1 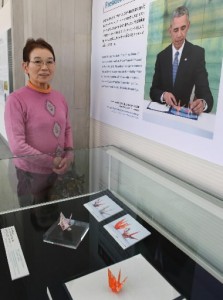 With the backing of more than 100 countries, negotiations for establishing a treaty that would outlaw nuclear weapons will begin this March. Now is the time to prohibit all nuclear weapon states from making use of their nuclear arms, set a direction toward their abolition, and strengthen the desire of the people of Hiroshima for human beings to find the key that will open the door leading to a world without nuclear weapons. The first part of this series looks at current international efforts to achieve a nuclear-free world, seen from the perspective of A-bomb survivors and young people.

Paper cranes given by President Obama

A solemn expression on his face, U.S. President Barack Obama places two paper cranes on the guest book at the Hiroshima Peace Memorial Museum. This image, captured in a photo when he visited the museum on May 27, 2016, is now on display there. Mitsue Fujii, 77, an A-bomb survivor and a resident of Naka Ward, recently saw the photo for the first time. She said, “I shared the delight of Mr. Obama’s visit to Hiroshima with my grandson by telling him that that event, and his paper cranes, were ‘the first step toward peace.’” Her grandson, Masatoshi Yano, 12, a sixth grader at Nakajima Elementary School, was invited to take part in Mr. Obama’s visit and was presented with a paper crane that he had made. Ms. Fujii was deeply moved and can vividly recall her excitement and that event as if they happened just yesterday.

Despite serving as the president of a nuclear superpower, Mr. Obama has consistently called for the pursuit of “a world without nuclear weapons.” Thus, over the past eight years, the people of the A-bombed city of Hiroshima have felt higher hopes for a nuclear-free world, although they have also faced frustration because of the impasse in advancing nuclear disarmament. Their expectations built to a climax on the day Mr. Obama came to Hiroshima, the first sitting American president to do so.

Seven months have now passed since that historic event, and Ms. Fujii said with a smile, “My grandson is studying hard.” Perhaps due to Mr. Obama’s encouraging words to Masatoshi, telling him to study hard, he has been reading many books about the atomic bombing and asking Ms. Fujii to talk about her experiences of that time. She was happy to see that the children of today, who will become the leaders of tomorrow, are paying more attention to the disastrous consequences of the use of atomic bombs.

However, a world without nuclear weapons, resulting from the complete abolition of all nuclear arms, cannot be seen anytime soon. It appears that the United States itself is blocking progress toward this goal. Ms. Fujii mentioned the U.S. government’s vehement opposition to the U.N. resolution to begin negotiations on a treaty to outlaw nuclear weapons. The United States advocates a gradual reduction in nuclear arms and urged the North Atlantic Treaty Organization (NATO) countries to oppose the resolution.

Ms. Fujii had been wanting both a visit to Hiroshima by Mr. Obama and the conclusion of a nuclear ban treaty since he became the U.S. president. Between September 2008 and January 2009, she boarded a non-government organization (NGO) ship, called Peace Boat, as part of a group of 103 A-bomb survivors, and visited 20 countries, where she talked about her experience of the atomic bombing on August 6, 1945. She also talked about the vision of Mayors for Peace, which seeks the total elimination of nuclear weapons by 2020, as well as the idea of creating a treaty to ban nuclear arms.

In these talks, Ms. Fujii described the A-bomb’s mushroom cloud she witnessed rising above the city while in the suburbs as well as terrible scenes like the charred bodies she saw in the city center when she went searching with her mother for relatives two days after the bombing. After she returned to Japan from the Peace Boat voyage, she wrote a letter to President Obama, calling on him to visit Hiroshima, see the destruction caused by the atomic bomb, and work to outlaw nuclear weapons. She asked the Peace Boat organization to deliver her letter to Mr. Obama.

Spurred by the persistent appeals of A-bomb survivors, the citizens of Hiroshima, and politicians, the visit to Hiroshima by President Obama was eventually realized. Although hopes rose for a world without nuclear weapons, the stance and decisions made by the U.S. government in the days that followed revealed large differences compared to the desires of the people of Hiroshima. And, on January 20, Mr. Obama will leave office after eight years and be succeeded by Donald Trump, who will be inaugurated the next U.S. president. Mr. Trump has made provocative statements about building up the U.S. nuclear arsenal that could spark a nuclear arms race.

Ms. Fujii is now reflecting on the significance of May 27 and says, “When Mr. Obama is no longer president, I’m afraid that his visit to Hiroshima will fade from everyone’s minds.”

While at the Peace Memorial Museum, Mr. Obama looked at the paper cranes that were folded by Sadako Sasaki, a girl who died of leukemia at the age of 12, a radiation-induced illness diagnosed 10 years after the atomic bombing. Her cranes are evidence of the inhumane consequences of the use of nuclear weapons, and urge people around the world to work for the realization of a nuclear ban treaty. Ms. Fujii believes that the actions taken by Mr. Obama during his time in Hiroshima, including when he presented her grandson with a paper crane, show the sincerity in his heart and she still has hopes for him in these last days of his presidency. She wants Mr. Obama to encourage Mr. Trump to visit the A-bombed cities of Hiroshima and Nagasaki, and she believes that, with repeated visits by U.S. presidents, the day when the United States will respond to the call to outlaw all nuclear weapons will finally come.

U.S. President Barack Obama’s visit to Hiroshima
U.S. President Barack Obama visited the Hiroshima Peace Memorial Park on May 27, 2016. In the Peace Memorial Museum’s East Building, he looked at personal effects of A-bomb victims and paper cranes folded by Sadako Sasaki. President Obama handed paper cranes that he himself had made to Masatoshi Yano, a sixth grader at Nakajima Elementary School, and Saki Hanaoka, a third-year student at Yoshijima Junior High School, one for each, then placed two other paper cranes next to the message he wrote in the museum’s guest book. After that, he offered flowers at the Cenotaph for the A-bomb Victims and delivered a speech in front of the Cenotaph. Then he gazed at the A-bomb Dome from the opposite side of the Motoyasu River. His stay at the Peace Memorial Park lasted 52 minutes.