The Key to a World without Nuclear Weapons, Part 2 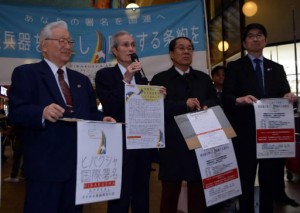 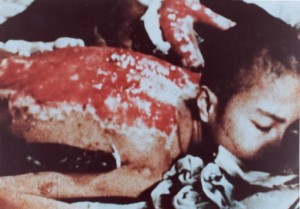 Sumiteru Taniguchi, 87, the chairman of the Nagasaki Atomic Bomb Survivors Council, was severely burned by the atomic bomb dropped on that city when he was 16 years old. As a result, he lost large amounts of subcutaneous fat and sweat glands on his back, which is now covered with a thin layer of scar tissue. Breathing deeply is painful, and cold air penetrates sharply into his body. But despite the condition of his health, he stood outside on a busy street in the city of Nagasaki last December 26, a cold and windy day. Though he was using a microphone, his hoarse voice was barely audible: “Please add your signature to this petition.”

Mr. Taniguchi was collecting names for the worldwide signature drive called the “Hibakusha Appeal for a Nuclear Ban Treaty,” which urges the world’s countries to conclude a non-partisan treaty to outlaw and eliminate all nuclear weapons from the earth. The signature drive was first proposed by Nihon Hidankyo (the Japan Confederation of A- and H-bomb Suffers Organization), the only nationwide organization of A-bomb survivors, then launched in April 2016. The organization is seeking to gather hundreds of millions of signatures by 2020, the year that will mark the 75th anniversary of the atomic bombings. In Nagasaki Prefecture, five groups of A-bomb survivors, including the Nagasaki Atomic-Bomb Survivors Council, formed the “Nagasaki Prefectural Residents Association” to promote the campaign, and they collect signatures on the streets on the 26th of each month and call on other local governments to cooperate with this campaign.

Mr. Taniguchi is leading the campaign despite his poor health and repeated hospital stays. At his personal request, last month Nagasaki Mayor Tomihisa Taue took part in the signature drive, too. In Nagasaki prefecture, the campaign has grown significantly as a result of collection boxes placed in local government offices and information about the campaign shared in public relations magazines. More and more heads of various local governments are adding their signatures to the petition. Mr. Taniguchi said, “In order to realize a treaty to outlaw nuclear weapons, I will continue to participate in this signature drive, even if I have to crawl on my stomach to get to the next place for the campaign. Concluding this treaty is the mission of those of survived the atomic bombings.” The public-private partnership in Nagasaki seems to be ahead of the same in Hiroshima.

Mr. Taniguchi was exposed to the Nagasaki bombing approximately 1.8 kilometers from the hypocenter on August 9, 1945, while delivering mail. He was hospitalized for three years and seven months, and was forced to lie on his stomach for one year and nine months for the treatment he had to endure on his back. “Kill me!” he screamed repeatedly because of the unbearable pain. Due to bedsores, fat and muscle tissue on the left side of his chest decayed, leaving visible the pounding of his heart.

With encouragement from Senji Yamaguchi, a Nagasaki A-bomb survivor who was hospitalized at the same time as Mr. Taniguchi, he became involved in the activities of A-bomb survivors. Meanwhile, he was working for a telegraph office. Following the 1954 Bikini incident, in which the crew of the Daigo Fukuryu Maru (The Lucky Dragon No. 5), a Japanese tuna fishing boat, were exposed to radioactive fallout from a U.S. hydrogen bomb test at the Bikini Atoll, a campaign to collect signatures in support of a ban on A- and H-bomb tests spread nationwide, and 30 million signatures were gathered over a period of one year. This campaign led to the formation of the Japan Confederation of A- and H-bomb Suffers Organization in 1956.

After the movement to ban A- and H-bombs split over the nuclear tests carried out by the former Soviet Union in the 1960s, Mr. Taniguchi steadily continued collecting signatures and staging sit-in protests against nuclear tests. He also continued talking about his experience of the atomic bombing, displaying shocking photos of the burns on his back. In 1982, he joined a group of A-bomb survivor delegates who attended the United Nations Special Session on Disarmament, and submitted some 100 million signatures collected from people all over the world at the United Nations.

Despite his strenuous and unflagging efforts to gather signatures and protest nuclear weapons, the desire for a nuclear-free world has still not been realized. As time went by, A-bomb survivors who supported the anti-nuclear movement passed away one after another. Senji Yamaguchi, who appealed against nuclear weapons with the use of the catchphrase “No More Hibakushas” in his speech at the United Nations Special Session on Disarmament in 1982, died at the age of 82 in 2013. Mr. Taniguchi’s wife, Eiko, who staged sit-in protests together with him, died in April 2016. Now, Mr. Taniguchi has committed himself to the current global signature drive, viewing this as the final effort of the A-bomb survivors. “From the story of someone whose life hovered between life and death because of the atomic bombing,” he said, “I would like as many people as possible to understand why we need a treaty that outlaws nuclear weapons.”

Mr. Taniguchi’s passionate desire has been passed down to the next generations including 24-year-old Mitsuhiro Hayashida, a third-generation A-bomb survivor of Nagasaki. He was born in Nagasaki and now lives in the city of Yokohama. He is a graduate student at Meiji Gakuin University and works at the head office for the signature-collecting campaign as the coordinator of public relations activities.

Last August, Mr. Hayashida created a page on a major website calling for signatures to widen the range of cooperation to young people. So far, around 900 signatures have been collected. But compared to the tens of thousands of signatures connected to such issues as nuclear power plants and “death from overwork” at the same site, the number of signatures for a treaty to ban nuclear arms has failed to grow as hoped. Mr. Hayashida believes this is due to the fact that people view the atomic bombings as events that happened 72 years ago. He said, “I’d like to tell people who visit the website that the atomic bombings in Japan are not simply an issue related only to the past, but this is still a compelling problem connected to the present.” He is now pondering the next step for increasing this support and mentions the idea of distributing a video in which Mr. Taniguchi and other A-bomb survivors are calling for signatures for a nuclear ban treaty.