The Key to a World without Nuclear Weapons, Part 4 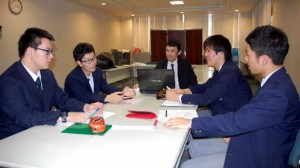 Although it’s winter, the sun shines strongly on Okinawa Shogaku High School, located on Japan’s subtropical island. Four members of the school’s Area Studies Club have reaffirmed the significance of their activities prior to beginning their annual signature collection drive, which will take place on the streets in February to drum up support for a treaty that would outlaw nuclear weapons.

“Both the Battle of Okinawa and the atomic bombings of Japan will fade from people’s minds unless the memories of these events are handed down to successive generations,” said Taiki Taba, 16, a first-year student at Okinawa Shogaku High School. He first visited Hiroshima last summer as part of his school’s club activities. After he listened to an A-bomb survivor’s experiences of the atomic bombing and toured the Peace Memorial Museum, his passion for peace grew.

Following the training and interaction of school personnel, Okinawa Shogaku High School and Eishin Gakuen Junior and Senior High School in the city of Fukuyama launched a Peace Summit in 2007, where the students of these schools presented their activities concerning peace and human rights issues. At the 2008 summit, the “Nuclear Abolition Now! Signature Drive by Junior and Senior High School Students” was proposed for the purpose of gathering support for the abolition of nuclear arms. With Hiroshima Jogakuin Junior & Senior High School in Hiroshima joining the campaign, the signature drive is now led by these three schools. The collected signatures are then submitted to the United Nations headquarters in New York every year through Mayors for Peace (for which Hiroshima Mayor Kazumi Matsui serves as president). So far, a total of 500,000 signatures have been submitted.

The number of members that belong to the Area Studies Club, which is a prime force in the signature drive in Okinawa, currently stands at 20. The club members focus their energy on passing down the history of the Student Corps who were mobilized to care for soldiers wounded in the Battle of Okinawa. The reason the Okinawa Shogaku students also put attention on the A-bombed city of Hiroshima stems from their desire to raise awareness of all the sufferings brought about by war and prevent them from happening again. Kaito Arashiro, 17, a second-year student, said, “There is a link between Okinawa and Hiroshima. We have to learn a lot more about the history of the war so that we can tell others about it.”

When the Area Studies Club members are collecting signatures on the streets of Okinawa, they often receive words of encouragement from the public. However, the students don’t feel the same intense interest in the abolition of nuclear weapons in Okinawa as they do in Hiroshima. Some people decline to sign the petition, saying that they cannot support the goal of abolition. In addition, on the island of Okinawa, where U.S. bases are located, people take a nonchalant view of nuclear abolition even though they share a desire for a nuclear-free world.

The people of Okinawa have various views on U.S. President Barack Obama’s visit to Hiroshima last May 27. After his visit to Hiroshima, Mr. Obama went to the U.S. Marine Corps Air Station Iwakuni, located in the city of Iwakuni, and said in a speech there that his visit to the A-bombed city is proof that the United States and Japan, enemies during the war, have become the closest of allies. Around that time in Okinawa, there was an outpouring of anger by the public when a former civilian employee of the U.S. Marines was arrested for sexually assaulting and murdering a local woman.

“With just a short visit to Hiroshima, U.S. President Barack Obama and Japanese Prime Minister Shinzo Abe came to be viewed as ‘good people.’ In Okinawa, however, there has been nothing good since the start of the Obama administration eight years ago,” said Emiko Miyagi, 68, an Okinawa City council member who engaged in organizing a memorial gathering for the slain woman. The excitement in Hiroshima caused by President Obama’s visit there made her uncomfortable. She added, “When all the nuclear weapons are eliminated, will peace come to Okinawa, too?”

Under the U.S. occupation of Okinawa, the property of Okinawa residents was forcibly requisitioned for the use of the U.S. military. Even after almost 45 years since Okinawa was returned to Japan, 70 percent of the land for U.S. bases in Japan is concentrated in Okinawa. The phrase which is often used to validate the need to reduce nuclear arms, “Even with no nuclear weapons, any threats from other nations could be responded to fully with conventional weapons,” is interpreted in Okinawa as a statement of support for enhancing the capability of U.S. military bases. Moreover, in the event of a crisis, the odds are high that Okinawa could become a target for attack.

Hiromori Maedomari, 56, a professor at Okinawa International University who is an expert on U.S. military bases, points out that as long as Japan’s security policy relies solely on military might, Japan will need U.S. bases and will continue to depend on the U.S. “nuclear umbrella.” He says that when the people of the island of U.S. bases and those of the A-bombed city appeal for peace, based on sharing their suffering, the first concrete step towards the abolition of nuclear weapons will begin.