The Key to a World without Nuclear Weapons, Part 6 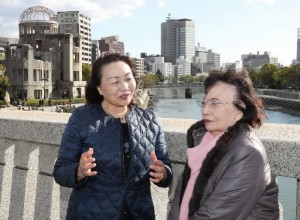 Part 6: Japan should play a liaison role to advance a nuclear weapons treaty

Mariko Higashino, 64, a housewife who resides in Asaminami Ward, Hiroshima, and Chisako Takeoka, 88, Mariko’s mother and an A-bomb survivor who lives near her daughter’s home, felt so disappointed by the Japanese government’s action that they still have not gotten over their distress. “What they did was shameless,” the pair said. “Our government should have at least abstained from voting.” Standing together on Aioi Bridge in Naka Ward, they lamented the state of the A-bombed nation, which voted against a resolution to start negotiations for a treaty that would make nuclear weapons illegal. That resolution was submitted at the United Nations General Assembly last year.

Aioi Bridge was the U.S. target for the atomic bomb. Ms. Takeoka, who crossed the bridge on the day after the bombing, has been sharing her account of her A-bomb experience for around a quarter of a century with schoolchildren visiting Hiroshima on their school trips. In order to hand down her mother’s memories to the next generation, Ms. Higashino underwent the three-year training program provided by the City of Hiroshima and became a “memory keeper” of the A-bomb experience in the spring of 2015. From last August to November, she embarked on a voyage by ship to share the A-bomb experience as a storyteller. During that trip, which was organized by Peace Boat, a non-governmental organization (NGO), she had an encounter which raised her hopes that a treaty to outlaw nuclear arms could be established.

On October 5, 2016, Ms. Higashino met with four parliament members in the Netherlands, and related her mother’s account of the atomic bombing. She told them that her mother had seen many bodies floating on the surface of the river, and that her grandmother lost her right eye. One conservative lawmaker, a woman, responded by saying, “I remember when my father took me to the Peace Memorial Museum in Hiroshima. I was ten years old then.” And the Dutch lawmakers pledged to make efforts to help effect a ban on nuclear weapons.

Three weeks later, the Netherlands abstained from voting on the resolution at the First Committee (on Disarmament and International Security) of the U.N. General Assembly. The Netherlands is a member of the North Atlantic Treaty Organization (NATO) and depends on the U.S. nuclear umbrella to ensure the security of its nation. With these circumstances in mind, the United States had asked the Netherlands to vote against the resolution. The fact that it abstained from voting thus came as a surprise to the people concerned. According to Selma van Oostwaard, the disarmament program officer for PAX, an antinuclear and peace group in the Netherlands, which arranged the meeting between the A-bomb survivors and parliament members, a signature drive by Dutch citizens calling for the government to back the resolution, as well as appeals made by Ms. Higashino and others, lent momentum to the parliament’s deliberations and became a driving force in urging the Dutch government to stand firm against the United States.

These events made Ms. Higashino realize that sending a message of peace from Hiroshima to the minds of every person in the world could help contribute to successful negotiations for establishing a treaty to outlaw nuclear weapons. Thus, she still finds it hard to understand why the Japanese government, which represents the only country on earth to have suffered nuclear attack and knows the devastation that befell Hiroshima better than any nation, was opposed to the resolution.

Explaining the reason for its “no” vote, the Japanese government said that rising tensions between the non-nuclear nations, which seek to establish the nuclear ban treaty, and the nuclear powers, which advocate a process of phased disarmament, might only grow amid such negotiations, and that the security of the nation must be assured. However, despite its claim of serving as a liaison between the nuclear and non-nuclear nations, Japan took its cue from the United States and the other nuclear weapon states when it came time to cast its vote, revealing the inconsistency of its stance. With the start of the negotiations now approved, some experts argue that Japan should take on the role of seeking to bring the nuclear powers into the treaty talks.

Last December, the U.N. Conference on Disarmament Issues took place in Nagasaki. At the conference, some of the participants, including Mitsuru Kurosawa, a professor from Osaka Jogakuin University and the founding president of the Japan Association of Disarmament Studies, spoke out with calls for a nuclear weapons convention. A convention like this is based on the idea of first seeking agreement on nuclear abolition as a legal obligation, and the concrete steps to eliminate these weapons would then be specified in a protocol, to be determined through negotiations after the first agreement has been made. In this scenario, there would be room for some nations, which now stand by nuclear deterrence, to tentatively join the treaty. Meanwhile, at events linked to the conference, young people from Hiroshima and Nagasaki made a clear appeal for the government to withdraw from the U.S. nuclear umbrella and contribute to talks designed to establish a legal ban on nuclear weapons.

The adamant appeals of the A-bomb survivors, who have borne much hardship since the atomic bombings, have resonated with young people, the court system, and the international community, finally bringing us to the year in which U.N. negotiations will begin on a treaty to outlaw nuclear weapons. On January 22, Ms. Higashino will begin her efforts this year as a “memory keeper” in Hiroshima, hoping to help advance these negotiations. She said, “It’s important for as many Hiroshima citizens as possible to take an interest in the negotiations at the United Nations.” These talks will begin at U.N. headquarters in New York on March 27.