The Key to a World without Nuclear Weapons, Part 5 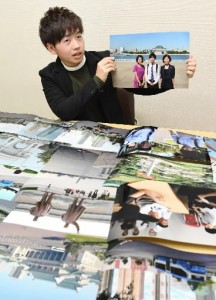 “What do you think about North Korea’s nuclear weapons?”

Mitsuo Horikawa, 20, a resident of Aki Ward and a second-year student in the International Studies Department at Hiroshima City University, located in Asaminami Ward, recalls the conversation he had with a North Korean student, Gyeonga, a young woman he met during a student exchange program last summer.

In 2003, North Korea declared that it was withdrawing from the Nuclear Non-proliferation Treaty (NPT) and since that time has carried out five nuclear tests, including two tests in 2016. Mr. Horikawa, who is interested in security issues and has been eager to know about actual conditions in North Korea, applied to take part in an exchange program organized by the Committee of Friendship Exhibition of North-South Korea and Japan, which is a citizens’ group in Tokyo that seeks to establish a relationship with North Korea through a program involving an exchange of children’s pictures. Between August 23 and 29 of last year. Mr. Horikawa traveled to Pyongyang, the capital of North Korea, via China with seven other students from various parts of Japan, including Tokyo.

In Pyongyang, Mr. Horikawa toured an amusement park and a zoo with 11 North Korean students who are learning Japanese at the Pyongyang University of Foreign Languages. As Mr. Horikawa has been studying peace issues in Hiroshima, he wanted to talk about the damage caused by the atomic bombing in Hiroshima. The opportunity to do this came to him on the bus while traveling to and from the Victorious Fatherland Liberation War Museum.

Gyeonga, who was sitting next to him, asked in Japanese what he thought about North Korea’s nuclear arms. Answering candidly, Mr. Horikawa said that he doesn’t believe this is a good idea because it runs counter to the international trend seeking the abolition of nuclear weapons. After a moment of silence, Gyeonga replied, “I know about the devastation caused by the atomic bombing of Hiroshima. We would like to build an impregnable defense system to protect our country from the use of nuclear weapons by other nations.”

According to Gyeonga, she once saw a documentary about the atomic bombing of Hiroshima. Reflecting on his visit to North Korea, Mr. Horikawa said, “I was very surprised that a North Korean student initiated a discussion about the damage caused by an atomic bomb.” It is unfortunate, however, that the knowledge she has gained about the bombing of Hiroshima has apparently caused her to see the United States, a nuclear superpower, as the “threat” that many other North Korean people see and to thus affirm North Korea’s nuclear program.

To deter other countries from using nuclear weapons, North Korea is building its own nuclear arsenal, the same sort of nuclear deterrence thinking that applies to both Japan and South Korea, which rely on the U.S. nuclear umbrella for their security. Therefore, the international community’s demand that North Korea alone must halt its nuclear development efforts is not persuasive. Some politicians and experts on nuclear issues propose “a nuclear-free zone” in which the United States, Russia, and China would pledge not to use nuclear weapons in Northeast Asia, while Japan, South Korea, and North Korea would agree not to possess them. However, Japan’s Foreign Ministry takes the stance that North Korea must first abandon its nuclear program.

During his visit to North Korea last summer, Mr. Horikawa came to understand the dilemma which involves the possession of nuclear weapons by one nation prompting another nation to seek to possess nuclear weapons, too. But at the same time, he also recognized how important it is for people of different nations to get to know one another through communicating at a grassroots level.

Mr. Horikawa said, “I heard from North Korean students that their country holds nuclear weapons because they don’t want their family members or loved ones to be hurt or killed.” Based on the news from North Korea’s national broadcaster, which declares that the nation will never give up its development of nuclear weapons and missiles, Mr. Horikawa’s had seen North Korea as an aggressor against the United States and Japan. However, last summer’s visit to North Korea left him with a slightly different impression of the country. When Mr. Horikawa told the students about the story of the Children’s Peace Monument, which was modeled on the life of Sadako Sasaki, a girl who died from leukemia 10 years after the atomic bombing, they had tears in their eyes and told him that atomic bombs are terrible.

Mr. Horikawa took pictures of children flying kites, wedding ceremonies, and the daily lives of North Korean citizens using his smart phone. These scenes, which are the same sort of moments that make up the lives of people in Japan, are hardly ever broadcast in Japan. He said, “Although there are differences of opinion and perspective between the Japanese and North Korean people, I’d like to tell my family and friends what I learned from young people in North Korea so that it can help improve dialogue between us and the people of North Korea.”

The Stockholm International Peace Research Institute (SIPRI) estimates that, as of January 2016, North Korea holds 10 nuclear warheads. Although its true intent is not understood, North Korea voted for a resolution to start negotiations for a treaty to ban nuclear weapons at the First Committee of the U.N. General Assembly (which deals with nuclear disarmament issues) in October 2016.