Current conditions in the Marshall Islands, the former site of U.S. nuclear tests 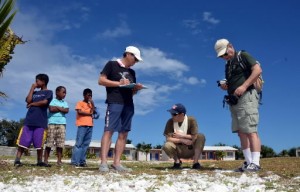 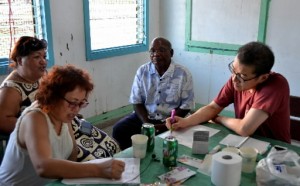 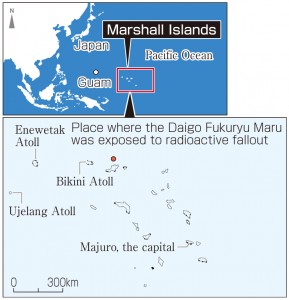 From January 10 to 22, the Japan Council against Atomic and Hydrogen Bombs (Gensuikyo) sent a delegation to the Marshall Islands, located in the central Pacific Ocean, to provide assistance to local residents. Nuclear tests in that part of the world by the United States left lasting damage on this island nation. The delegates visited the Enewetak Atoll, which was the site of U.S. nuclear testing, along with the Bikini Atoll. The Chugoku Shimbun traveled with the Gensuikyo group to report on the activities they pursued to investigate the current health conditions of the islanders and the amount of residual radioactivity. Despite the many nuclear tests that were carried out here, local residents have returned to the atoll to live.

Enewetak Atoll is comprised of about 40 islands, and is located about 1,100 kilometers northwest of Majuro, the capital of the Marshall Islands. Seven delegates from Gensuikyo, including a doctor and members experienced in measuring radiation levels, stayed on the island of Enewetak, the largest island in the atoll, from January 13 to 18. About 600 residents are now living on the island.

The delegation held free health counseling for these residents in the building that houses the only shop on the island. About 60 men and women, ranging from teenagers to people in their 80s, received counseling over the course of three days. Arata Mukouyama, 57, a doctor and resident of Kunitachi, Tokyo, and other members examined their urine, blood pressure, and thyroid conditions, and asked if they have any health concerns.

One resident had already undergone a thyroid operation to remove cancerous tissue. Examinations by hand found swollen thyroid glands in 11 residents. Mr. Mukouyama said, “My impression is that more cases of swollen thyroids have been observed in these checkups than in checkups given to A-bomb survivors in Japan. But I’m unable to definitively say if this is due to radiation.” However, one resident said that greater numbers of people have died of cancer since the islanders returned to this island, their original home, in 1980 after being forced to move to the Ujelan Atoll years before. Mr. Mukouyama said that a more detailed examination was needed using equipment like a whole-body counter.

In addition, many people seem to have diabetes, and their blood pressure is relatively high. Even today, living in the northern islands of the Enewetak Atoll is prohibited, and residents must rely on aid provided by the U.S. government as compensation, such as canned food. Bhalachandra Keni, 62, a doctor at the only clinic on the island, said, “I suspect the condition of their health is partly affected by their diet.”

Amount of residual radiation not yet clearly understood

Mineo Kato, 72, a former engineer for the Japan Atomic Energy Agency (located in the village of Tokai, Ibaraki Prefecture) measured radiation levels at 28 locations, including at an elementary school, along the coast, and in a residential area. In most locations, the measurement was 0.01 microsieverts per hour, which is the same level as radiation that occurs naturally in the environment.

But there was some variation in the values measured. For example, 0.02 microsieverts per hour was detected in several spots, such as the foundation of a concrete building and church and the south end of the air field, and 0.05 microsieverts per hour was recorded at a concrete block that remains on the coast. Mr. Kato said emphatically, “Although the values we measured were not so high, there are some radioactive materials that this radiation dosimeter equipment cannot detect. As there is the possibility that local residents may take such substances into their bodies through breathing or eating, it is necessary to analyze the soil and food for a better understanding of the actual conditions.”

The delegation held a gathering for the residents on January 17, and explained the results of the health counseling and radiation measurements to about 100 residents who took part in the meeting. The participants then spoke out, one after another, sharing their concerns about the safety of fish and coconuts they catch in the atoll. Akin Albios, 57, a resident who once helped with the radiation measurements conducted by the United States in the 1980s and 1990s, expressed disbelief toward that nation. “At the time, they wouldn’t tell us clearly what the measurements were,” he said.

Yayoi Tsuchida, the deputy secretary general of Gensuikyo, appealed to the residents by saying, “We must ask the United States to disclose the information they have in order to more accurately understand the conditions of radiation contamination here. I hope you will be persistent about asking that the United States carry out full-scale decontamination work in the atoll and provide fair compensation for the residents.”

Members of Gensuikyo began paying visits to the Marshall Islands in the 1970s. The group also provides support, including health counseling, to former residents of the Rongelap Atoll, who are still displaced from their home islands.

Nuclear testing in the Marshall Islands
From 1946 to 1958, the United States conducted a total of 67 nuclear tests at the Bikini Atoll and the Enewetak Atoll in the Marshall Islands, located in the central Pacific Ocean. At the time, the atolls were U.N. trust territories. In particular, the hydrogen bomb test dubbed “Bravo,” which was performed at the Bikini Atoll on March 1, 1954, yielded an explosion of 15 megatons, around 1,000 times more powerful than the atomic bomb dropped on Hiroshima. It is widely known that the crew members of Japanese tuna fishing boats, such as the Daigo Fukuryu Maru (The Lucky Dragon No. 5), were exposed to radioactive fallout from that test. There were 44 nuclear tests carried out at the Enewetak Atoll and adjacent sea, and local residents were forced to move to the Ujelang Atoll, located about 200 kilometers southwest. After the United States decontaminated some of the islands, they brought the residents back to the atoll in 1980. But they are still not permitted to live in the northern islands of the atoll. The Marshall Islands gained its independence in 1986.