The Key to a World without Nuclear Weapons: Appeal from the Marshall Islands, Part 1 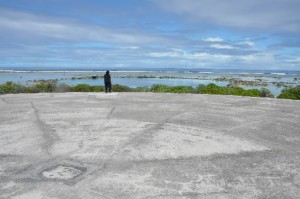 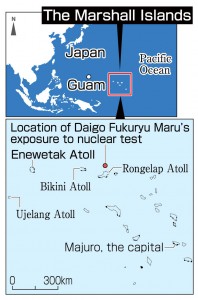 The Marshall Islands is an island nation located in the central Pacific Ocean. Between 1946 and 1958, the United States carried out 67 nuclear tests to develop its nuclear arsenal. The residents of these islands still suffer from the negative legacy left by these tests, including radioactive contamination and enforced emigration. In January, prior to a multinational conference that will be held in March at United Nations headquarters in New York, to begin negotiations for establishing a treaty that would outlaw nuclear weapons, the Chugoku Shimbun visited the Enewetak Atoll, where the largest number of nuclear tests were performed, and observed the inhumane nature of these weapons first-hand.

At the northern end of the 0.37 square-kilometer Runit Island, part of the Enewetak Atoll, Kanile Jitiam, 30, pointed to the nearby seashore and said that this area is a good place to herd and catch sea turtles. It takes 30 minutes for him to get to this area by boat.

What lies there is a rocky circular-shaped stretch of land, a crater that was produced by the nuclear explosions. The island’s mainland has been closed permanently due to the severe contamination caused by radioactive substances such as plutonium.

After the residents of the island were forcibly relocated, the United States carried out a total of 44 nuclear tests in the Enewetak Atoll and nearby sea. After this era of nuclear testing, the number of islands opened to returnees was limited to three, including Enewetak Island in the southern part of the atoll, where the contamination was relatively low and the surface soil had been decontaminated.

Runit Island, where 10 nuclear tests were staged and where the United States built a concrete “Runit Dome” (114 meters in diameter) to dispose of contaminated soil, was turned into a “final waste disposal site.”

In a report it issued in 1982, to assess the safety of the island, the United States National Research Council (NRC), an academic body, emphasized that plutonium in the ground is very likely to be exposed by the wind, rain, and ocean waves, and it strongly urged that the entire island remain closed. Because the half-life of the alpha rays emitted by plutonium is 24,000 years, it is difficult to measure radiation levels on the island.

Before the nuclear tests were conducted, the whole area had been a rich fishing ground. One fisherman said that he knows the area has been “poisoned,” but he has no choice but to fish there in order to survive. Others besides Mr. Jitiam come from farther away to fish in this area.

Copper cables that the United States used for the nuclear tests, left abandoned on the land and in sea beds, also pose a risk of radiation exposure for residents. The copper wire, however, can serve as a source of income when dug out and sold. As a result, the awareness of the risk of inhaling radioactive substances while digging tends to fade, and they continue pursuing these cables.

Katios Ken, 79, a resident of Enewetak Island, was once involved in mining on Runit Island and says that pulling out the cables from the ocean floor or from under the ground was tough work. But the copper wire could be sold for 1.5 dollars per kilogram. The mining business on the island expanded when a Chinese company opened a daily goods shop on Enewetak Island 10 or so years ago and began to purchase scrap metal. While most of the metal was dug out from Runit Island, mining has continued on other islands where living is prohibited.

Samson Yoshitaro, 66, a resident of Enewetak Island and an elementary school teacher, questioned whether the U.S. assertion that living on the island is safe is credible or not. What concerns him are the former residents of Rongelap Atoll who were exposed to radioactive fallout emitted by the nuclear tests. The residents, believing the declaration made by the U.S. government, returned to their homes but were later forced to leave the island again due to a spate of health problems caused by residual radiation.

A lot of them have reportedly emigrated from Enewetak Island to Hawaii. Residents now on the island say that they are constantly wondering whether or not they should remain there and they hope that scientists on the island will soon clarify the facts regarding the radioactive fallout. Indelible fear and distrust cast an ever-present shadow over the lives of the island’s residents.