The Key to a World without Nuclear Weapons: Appeal from the Marshall Islands, Introduction 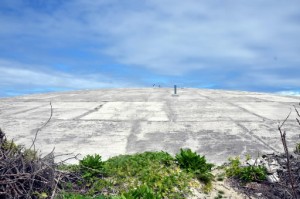 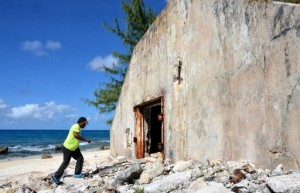 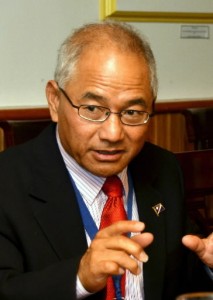 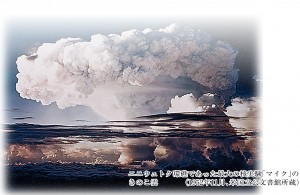 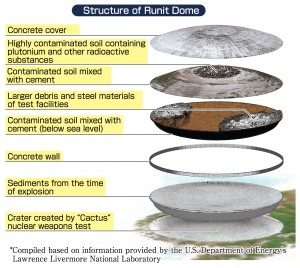 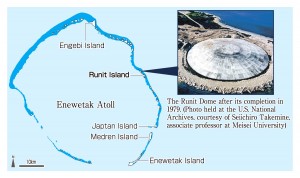 The United States performed 44 nuclear tests at Enewetak Atoll in the Marshall Islands, located in the central Pacific Ocean. This number exceeds the 23 tests conducted at Bikini Atoll, known widely for one test which produced radioactive fallout suffered by the Daigo Fukuryu Maru (The Lucky Dragon No. 5), a Japanese tuna fishing boat. The total force of the nuclear explosions at Enewetak was 32,000 kilotons of TNT, which is equivalent to 2,000 times the power of the 16-kiloton Hiroshima bomb. To dispose of the radioactive soil and debris from these nuclear tests, the Runit Dome was constructed. But the dome is now showing wear and tear, creating concerns about radioactive substances leaking out into the Pacific Ocean.

The Runit Dome is located at the northern tip of Runit Island, which stretches north and south. The dome is placed within the crater, which is 106 meters across and 9.5 meters deep at its deepest point, created by the “Cactus” nuclear test in 1958. The dome contains a mixture of cement with 83,000 cubic meters of radioactive soil and 4,700 cubic meters of debris collected through the decontamination work on some 40 islands carried out by the United States starting in 1977. The dome was completed in 1979 after the radioactive materials were covered with 357 concrete panels that are 45 centimeters thick.

Today, the dome’s concrete panels are cracking and flaking. Vines are creeping along the dome’s surface and their roots are spreading in the joints of the panels. Madison Juda, 26, said that he is afraid of the dome and has never gone there. He works on Enewetak Island, which is located about 20 kilometers south of Runit Island. Some people go to the area around the dome to fish or to gather copper wire, while others fear it and call it a “tomb.”

Under the administration of Barack Obama, the U.S. government began examining the dome’s condition in 2013. The report released that same year stressed that there were no functional problems with the concrete, but it did acknowledge that the water level in the dome is fluctuating with the tides, pointing out the possibility of radioactive water leaking into the ocean.

A report compiled in 1975 examined methods for disposing of contaminated soil. It referred to waterproofing the bottom of the crater, but it eventually suggested dumping the soil directly into the crater in order to keep costs down. This means that the possibility of water leaking out was envisioned when the dome was constructed.

The report also said that the leak will not result in an increase in contaminated water and that the contamination level will be much lower compared to that of the sediment, produced by the nuclear explosions, that lies on the bottom of the atoll. Taking a similar viewpoint, the report issued in 2013 stated that the contaminated water will become diluted with sea water immediately after entering the ocean. According to the report, even if all the contents of the dome were to leak out, there would be no effect on the local residents.

But Jackson Ading, 56, the mayor of Enewetak, said that local residents are still worried about a leak, since climate change has been causing more erosion along the coast. The United States simply doesn’t want to take the nuclear waste home with them, Mr. Ading added. He also questioned why the local residents have to shoulder the burden created by U.S. nuclear tests.

The United States considers the decontamination project it carried out at Enewetak Atoll a success. But the eerie sight of the Runit Dome standing on coral reefs shows up the contradiction in the government’s assertion.

Enewetak Atoll is about 1,100 kilometers to the northwest of Majuro, the capital of the Republic of the Marshall Islands. But the damage to this atoll is not well known compared to that of Bikini Atoll, where the “Castle Bravo” hydrogen bomb test was conducted, which triggered a global protest against nuclear weapons.

Most of the 44 tests were conducted in the northern and eastern parts of the atoll. The tests destroyed some of the islands there, including Elugelab, which was the hypocenter of the largest hydrogen bomb test code-named “Mike.” As the level of radiation was high in the northern part of the atoll, the U.S. government decided that residents should live on the three southern islands of Enewetak, Medren, and Japtan.

Between 1947 and 1980, the residents of the atoll were forced to move to Ujelang Atoll, which lies about 200 kilometers southwest, because of the nuclear tests. Ujelang Atoll is smaller than Enewetak Atoll, and there was not enough food. Yoshiko Luke, 77, said that she was always hungry and that she ate whatever was edible.

They began to go back to the three islands in the southern part of Enewetak Atoll in 1980. Many of them, though, had been born in Ujelang Atoll. Limejo Ritomuta, 65, is one of them. She said that she misses her birthplace. There are mixed feelings among those who have suffered as a result of the actions taken by the nuclear superpower.

The nuclear tests are not the only tragedy Enewetak Atoll has experienced. During World War II, a battle was fought there. Japan temporarily occupied the atoll, but the United States launched a ground battle in 1944. Takaji Isac, 79, who lived on Medren Island at the time, said that he and his family fled into a bunker. When he came out of the bunker after the sounds of gunfire and explosions had faded, he recalled finding the bodies of both Japanese and American soldiers lying on the ground. He added that his great-grandmother was unable to escape the battle. The island was turned into complete burnt-out ruins. Casualties included 2,677 Japanese soldiers, 195 American soldiers, and at least 18 local residents.

In 2014, I visited Hiroshima with Christopher Loeak, who was then president of the Marshall Islands. I felt both fear and sorrow when I learned that the atomic bomb destroyed the city and burned children. After attacking Hiroshima and Nagasaki with atomic bombs, the United States began to conduct tests in the Marshall Islands to produce more nuclear weapons.

Some residents of Enewetak Atoll have returned to live where the nuclear tests were carried out. But this doesn’t mean that the problems created by the nuclear tests have been resolved. The decontamination work has not been sufficient, and people are only able to live on three islands in the southern part of the atoll. The victims have not received adequate compensation, either. Above all, the Runit Dome weighs heavily on our lives. We worry constantly that radioactive substances might leak out and have a harmful effect on the health of the residents.

Concerning the construction of the dome, there may have been an agreement between the United States and local residents for form’s sake. But when the residents were told that they could go home, did they have any other choice but to go back? The same thing can be said about the atoll being chosen as a test site. I don’t think there were agreements in the true sense of the word. The United States must take responsibility and carry out further decontamination work and remove the dome.

Silence is traditionally considered a virtue in the Marshall Islands. However, we should pursue a stronger protest against the damage caused by these nuclear tests.

Major incidents related to the Marshall Islands and nuclear weapons

October 1914:
The Japanese Imperial Army occupies the Marshall Islands, then a German territory.

August 1945:
The U.S. drops atomic bombs on Hiroshima and Nagasaki.

December 1947:
The U.S. selects Enewetak Atoll as a test site. Its 145 residents are forced to move to Ujelang Atoll.

March 1954:
The “Castle Bravo” hydrogen bomb test at Bikini Atoll is conducted. Crew members of fishing boats including the Daigo Fukuryu Maru (The Lucky Dragon No. 5) and the residents of Rongelap and Utirik atolls, located downwind, are exposed to radioactive fallout from the bomb.

April 1972:
The U.S. announces that former residents of Enewetak Atoll will return to the atoll after decontamination work.

May 1977:
The U.S. begins decontamination work of Enewetak Atoll.

September 1979:
The Runit Dome is completed.

April 1980:
Former residents of Enewetak Atoll return to the atoll.

June 1983:
A Compact of Free Association with the U.S., which includes compensation for the damage caused by nuclear testing, is concluded.

October 1986:
The Marshall Islands becomes an independent state in free association with the U.S.

April 2003:
The Marshall Islands concludes a new Compact of Free Association with the U.S., which does not include a provision for additional compensation for victims of nuclear tests.

April 2014:
The Marshall Islands files lawsuits against nine nuclear weapon states at the International Court of Justice, arguing that the nations are violating international law with respect to their nuclear disarmament obligations.

October 2016:
The International Court of Justice rules against a complaint brought by the Marshall Islands. The ICJ rules it has no jurisdiction. The First Committee of the U.N. General Assembly, which deals with disarmament issues, adopts a resolution to begin negotiations for a treaty to prohibit nuclear weapons in March 2017.