The Key to a World without Nuclear Weapons: Appeal from the Marshall Islands, Part 2 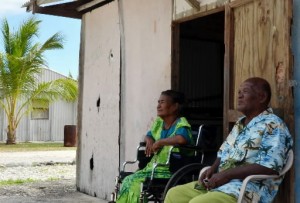 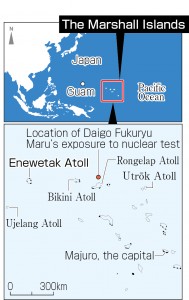 In 1947, when the United States chose Enewetak Atoll in the Marshall Islands as a nuclear test site, the local residents were relocated to Ujelang Atoll, some 200 kilometers southwest of Enewetak. One day, “ashes of death,” containing radioactive fallout from a nuclear explosion, fell on Ujelang. Tokko Peter, 75, who returned to Enewetak Atoll after the nuclear tests ended and now lives on Enewetak Island, remembers that day more than 60 years ago and says that the entire sea was covered with white flour-like powder.

That day, the residents were taken offshore from Ujelang by a U.S. battleship without any explanation. Some residents say that the entire sky turned bright red and others recall that the normally quiet sea shook and roared. Tokko Peter witnessed the scene from the deck of the ship.

When the residents returned to Ujelang, they saw that the sea around the island was covered with white ash. They disembarked from the ship and went ashore while pushing the ash aside. At their homes, ash also accumulated on the surface of water stored in drum cans and tanks. The residents say that they blew away the ash and then drank the water to quench their thirst.

While very few people in Ujelang can recall when this incident occurred, Ms. Peter believes it happened around 1953. Based on official U.S. documents which recorded the temporary relocation of the residents, this nuclear test is thought to be the first-ever hydrogen bomb test “Mike” that was carried out at Enewetak Atoll in November 1952. The explosive force of the bomb was 10.4 megatons, which was the largest explosion among the 44 tests performed at Enewetak Atoll and was approximately 650 times more powerful than the atomic bomb dropped on Hiroshima. As a result of the explosion, Elugelab Island, a small island located at the bomb’s hypocenter, was completely destroyed and disappeared, and later a crater of 1.9 kilometers in diameter and 50 meters in depth, was created at the original location of the island.

After the nuclear tests, the residents suffered from terrible itchiness all over their bodies. Ms. Peter developed multiple cases of cancer in her thyroid and abdomen, and was treated with surgery. Two friends, who had bathed in a drum can with radioactive ash floating on the surface of the water, died of skin cancer, one after the other, a few years ago. Ms. Peter mourns their deaths by saying that they were just young girls at the time and never thought that the powder could be harmful to their health. She and her husband, Neptali Peter, 82, who was also exposed to the radiation from the nuclear tests, will remain fearful of the health effects for the rest of their lives.

Since staging numerous nuclear tests in the Marshall Islands, the United States has only acknowledged that the residents of Rongelap Atoll and Utrōk Atoll were exposed to radioactive fallout as a result of the “Castle Bravo” hydrogen bomb test. It was this test that also exposed the crew members of the Daigo Fukuryu Maru (The Lucky Dragon No. 5), a Japanese tuna fishing boat, to radioactive fallout. With regard to Enewetak Atoll, the U.S. government will only admit that the land used for the test site was contaminated.

Some Enewetak residents were also exposed to the risks of radiation when they were involved in the decontamination work carried out between 1977 and 1980 to prepare for the residents’ return from Ujelang. Josi Yoshitaro, 60, who was employed by an American company for this decontamination work, recalls that in those days no explanation was given regarding radiation and that he was only supplied with gloves and a cap to perform the work.

David Obet, 65, who helped oversee the decontamination work and is a representative of the Enewetak Atoll autonomous community, was engaged in these efforts in the northern part of the atoll where contamination levels were high. Although he worked hard for his homeland, he wasn’t even provided with a mask or gloves.

Mr. Obet says it is true that the number of residents who have died from cancer has increased over the years, starting from the time before they returned to the island, and he wonders if these illnesses can be traced to the “ashes of death.” In fact, many of the residents have lost parents and grandparents to thyroid cancer and blood cancer. However, because many of the people who developed cancer moved to Hawaii to receive treatment, then died there, no accurate data is available to indicate a relationship between their diseases and radiation exposure. The islanders who can testify to the harm caused by the nuclear tests, from the tests themselves to the decontamination work, and should rightfully be spared, their numbers continue to decline.