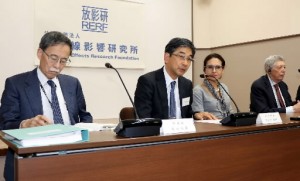 The Radiation Effects Research Foundation (RERF), a research organization that is administered by the governments of Japan and the United States and located in Minami Ward, Hiroshima, will mark the 70th anniversary of its establishment on March 10. For many years, RERF has been engaged in studying the health conditions of A-bomb survivors and second-generation A-bomb survivors. RERF’s pioneering research in the A-bombed city has been able to help clarify the connection between radiation exposure and disease, and underlies the efforts being made around the world to enhance radiation protection. This feature series will report on RERF’s achievements and its future aims.

On March 3, the Scientific Advisory Committee for RERF, composed of 13 outside researchers, held its annual meeting at RERF to provide recommendations for the organization’s research. At a press conference after the meeting, committee co-chair Tomotaka Sobue, a professor of Osaka University’s graduate school and an expert on cancer epidemiology, stressed that RERF had accumulated a tremendous amount of research data. He added, “Although the number of A-bomb survivors will continue to decline, there are many themes that can still be investigated with that data.”

In 1947, RERF rented part of the Hiroshima Red Cross Hospital building and began pursuing its research that year. Back then it was a U.S. government entity known as the Atomic Bomb Casualty Commission (ABCC). The pillars of RERF’s research are the Life Span Study involving about 120,000 survivors, to track the cause of death, and the Adult Health Study to investigate the correlation between A-bomb radiation exposure and the onset of disease in about 23,000 people, which is an epidemiological method of studying the cause of disease in a statistical way. The study has determined that the greater the amount of radiation exposure a person receives, the greater the risk of developing or dying of cancer, including leukemia. This finding has led to the establishment of radiation protection standards internationally.

A recent study by RERF has produced more specific data on which areas of the body have a higher risk of developing cancer after radiation exposure. Professor Sobue expects this research can lead to further advances beyond the field of epidemiology, saying, “I hope RERF will make effective use of its data so that more fruitful results can be obtained, including the idea of clarifying the mechanism of how cancer develops.”

The research know-how held by RERF is now being utilized to study the impact of the nuclear accident at the Fukushima No. 1 (Daiichi) nuclear power plant, which occurred in 2011. In 2015, the organization launched a long-term health study of about 20,000 people who were engaged in the emergency work at the plant in the aftermath of the accident. RERF’s Scientific Advisory Committee has also recommended that it initiate a health study involving the residents of Fukushima Prefecture.

At first, organization had a more military purpose

When ABCC was first established, its dominant purpose was military-related research. Thus, the organization was criticized by A-bomb survivors for only pursuing research and not providing them with medical treatment.

Akio Awa, 83, the former head of the genetics department at RERF and a resident of Saiki Ward, looked back on his days at the organization and said, “I couldn’t view the survivors as simply subjects for our research. I would make a point of telling the people under me to treat them with sincerity and respect.” Mr. Awa was once repeatedly asked by a pregnant survivor if it would be okay for her to give birth to the baby. Hearing her emotional words, he realized that the survivors viewed the organization very critically. He said, “I had been motivated by the fact that I was involved in pioneering research under adverse conditions.”

As one of the plaintiffs who has cooperated in RERF’s research, Taku Kakuta, 53, a high school teacher and a resident of Higashi Ward, Hiroshima, expressed his understanding for the importance of this research but said, “My feelings are torn. I hope RERF will continuously consider whether or not its studies are really on the side of the A-bomb survivors and the second-generation survivors.”

July 1948:
ABCC is established in Nagasaki.

October 1950:
A national survey of A-bomb survivors is conducted as a supplement to the national census. Based on the result, the Life Span Study is initiated.

April 1975:
ABCC is reorganized and the Radiation Effects Research Foundation (RERF) is established as a foundation jointly managed by the Japanese and the U.S. governments.

May 2000:
The Health Study for second-generation A-bomb survivors begins.

October 2015:
The Health Study begins for workers involved in the accident at the Fukushima No. 1 (Daiichi) nuclear power plant.