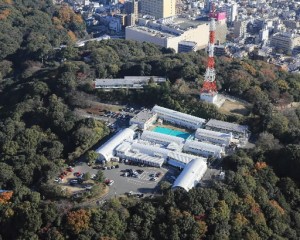 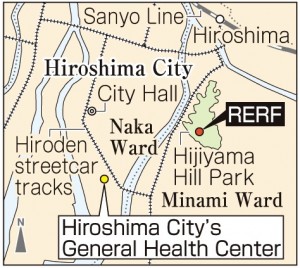 Relocating with research needs in mind

On Hijiyama Hill Park in Minami Ward, Hiroshima, with its view of the city center, there are rows of semi-circle-shaped buildings that serve as the home of the Radiation Effects Research Foundation (RERF.) These buildings, which were built 67 years ago, have leaked with rain and been repaired repeatedly. When the Geiyo Earthquake occurred in 2001, dozens of cracks appeared. Despite the fact that the age of the buildings is apparent, the issue of relocating the organization has been at an impasse for some time because the U.S. government has not been persuaded that the relocation is worth the financial commitment.

Proposal to move announced to the public

Last November, the City of Hiroshima announced a proposal for this relocation, with the idea of moving RERF to the second, third, and fourth floors of the city’s general health center, a six-story concrete building located in Naka Ward, Hiroshima. Six months before the city’s announcement, the Ministry of Health, Labor and Welfare, which oversees RERF, had notified the city that it was difficult for the Japanese and U.S. governments to fund the construction of a new building. After receiving that notice, this new proposal was developed.

Currently, the Hiroshima City Medical Association, the co-owner of the general health center, uses this space for exam facilities. The proposal is based on the assumption that the association would move these facilities to a new building, which it is now planning to construct. Hiroshima Mayor Kazumi Matsui views the proposal very positively, saying, “From the city’s point of view, this direction would address the important issue of RERF’s relocation.” After receiving a request for cooperation from the city, the association began to consider this option, and the proposal was made more concrete.

Behind the city’s efforts to settle the relocation issue is the desire to advance a project to reorganize Hijiyama Hill Park into the “Hill for Peace.” In addition, the city is also weighing the feelings of citizens who were never happy with the fact that the Atomic Bomb Casualty Commission (ABCC), the forerunner of RERF, was established in that location. The contention is that the United States, under the postwar occupation, pressed ahead with construction of the ABCC buildings upon Hijiyama Hill Park, which the people of Hiroshima had enjoyed as a place of recreation for many years.

According to the city’s proposal, RERF’s total floor space would be reduced to about 5,000 to 7,000 square meters after the relocation, which is about half to three-fourths of the current RERF floor space. RERF, the key player in this possibility, has not yet made clear whether or not it will agree to the proposal. The organization is now in the process of developing a future strategy for its research, looking five to ten years on the horizon. In June, RERF will finalize this strategy, including the amount of space and types of facilities needed for these studies, then begin discussing its relocation.

Meanwhile, Otsura Niwa, the chairman of RERF, plainly stated that “RERF will persist in its research, even through another roughly 60 years, when all the A-bomb survivors and second-generation survivors are gone.” He also expressed a desire to expand the organization’s research, such as clarifying the mechanism of radiation’s effects on the human body, and did not view favorably the idea of downsizing RERF’s work to any significant degree.

Additionally, the RERF laboratories in Hiroshima and Nagasaki have stored about 620,000 containers of biological samples, including blood and urine. To maintain these samples in a single location, RERF has been moving forward with a resource center for its research, installing a large-scale freezer in 2015, about 13 meters in length, which consumes a great deal of electricity. An environment for experimenting with mice would also need to be prepared. These unique characteristics of the facility would be part of the challenge in effecting a successful relocation.

Mr. Niwa said, “We would like to be a research institute that the local people can be proud of.” Will RERF be able to realize its ideals for the future, and for all its stakeholders, including A-bomb survivors and citizens? The organization is at an important crossroads in the year of its 70th anniversary.

Relocating RERF
In 1950, three years after the establishment of the Atomic Bomb Casualty Commission (ABCC), the forerunner of RERF, ABCC was moved to Hijiyama Hill Park in Minami Ward, Hiroshima. Then, as an increasing number of local residents called for it to be relocated elsewhere, the City of Hiroshima purchased the former site of Hiroshima University’s Faculty of Engineering in 1986 as a potential location. Subsequently, in 1993, RERF developed plans to construct a new facility there. However, when the U.S. government balked at these plans because of the costs of construction, the issue of relocation came to an impasse.