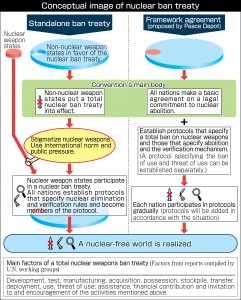 The first-ever negotiations for a treaty that would outlaw and eliminate the world’s nuclear weapons will open on March 27 at United Nations headquarters in New York. Because the active involvement of the nuclear powers in these negotiations is not expected, a plan which seeks to create a so-called “standalone ban treaty” even by non-nuclear nations alone has risen to the fore. A treaty of this nature would immediately ban all development, possession, and use of nuclear weapons. At the same time, the idea of creating a “framework agreement” that would permit a gradual ban on nuclear arms and would encourage the nuclear weapon states to become involved in these negotiations has also been put forth. The Chugoku Shimbun considers how these ideas could chart a path toward nuclear abolition.

“Stigmatize nuclear weapons” is the appeal made by the International Campaign to Abolish Nuclear Weapons (ICAN), an influential non-governmental organization (NGO) that is urging all nations to conclude a treaty that would outlaw nuclear weapons. The non-nuclear nations, which make up most of the countries of the world, have determined that only some nations are ready to back and abide by a total ban on nuclear weapons and so, in this way, will work toward creating an international norm of the notion that nuclear arms are inhumane weapons that must never be used. Then, once this norm successfully takes root, the non-nuclear nations will put pressure on the nuclear weapon states to abolish their nuclear arsenals.

The “Model Nuclear Weapons Convention,” which the government of Costa Rica originally submitted to the United Nations in 1997, is a comprehensive draft that sought to set a time frame for the dismantlement of nuclear weapons and verification rules at the time the convention was established. Under this convention, the setting of both the time frame and the verification rules required the involvement of the nuclear weapon states, and their ratification was a prerequisite for putting the convention into effect.

However, under a standalone ban treaty, the concrete measures for realizing the abolition of nuclear weapons and verifying their elimination would be decided at a later stage. The nations backing this treaty will make use of public opinion against nuclear arms to press the nuclear powers to join the treaty, too, and eventually specify the needed concrete measures in a legally binding protocol. This is the path to abolition envisioned by the standalone ban treaty.

A successful model that utilized the idea of “stigmatizing” weapons to promote disarmament can be seen in the Landmines and Cluster Munitions Conventions, which was led by nations seeking these bans and put into effect in 2010. These conventions eventually resulted in the decision by the only manufacturer of such weapons, based in the United States, which was not a member of the conventions, to end their production of landmines and cluster munitions. With respect to these conventions, though, some countries that held landmines and cluster munitions agreed to back these agreements from the beginning, and moreover, the dangers posed by landmines and cluster munitions are not on the same catastrophic scale as nuclear weapons. In addition, there is the concern that, if a similar approach is taken for nuclear weapons, not only will the effectiveness of the approach be in doubt, but the divide between the nuclear weapon states and non-nuclear nations could widen even further.

In contrast to the standalone ban treaty, the framework agreement limits its goals to a basic agreement in which the nuclear powers make a legal commitment to ensure, for instance, “an unequivocal undertaking by nuclear armed states to accomplish the total elimination of their nuclear arsenals leading to nuclear disarmament,” and seeks to establish a framework agreement involving all nations from the very beginning. Concrete ideas concerning this agreement were suggested by Peace Depot, an NPO based in the city of Yokohama, and these ideas are in line with the final document from the Review Conference of the 2000 Treaty on the Non-Proliferation of Nuclear Weapons (NPT). Compared to the standalone treaty, this approach would make it easier to press the nuclear weapon states to reduce their nuclear arms.

With regard to concrete prohibitions, these would be specified in separate protocols at the same time. The advantage of the framework agreement is that each country can participate in the protocol in accordance with its own security environment. For example, a high priority is placed on participating in the critical protocol that would ban the use of nuclear weapons or the threat of their use. On the other hand, measures for increasing the transparency of a nation’s nuclear weapons capability, reducing the roles that nuclear weapons play, and verifying their elimination would be defined in different protocols, and countries which currently depend on nuclear arms for their security would be urged to participate in these protocols.

Amid this friction among nations over nuclear weapons, the U.N. Framework Convention on Climate Change could serve as a useful model. However, some experts on nuclear arms reduction say that even if a treaty is concluded, many countries will withhold their participation in the protocol that bans nuclear weapons.

In these U.N. negotiations, Japan will be faced with the dilemma of having to decide whether or not it will review its policy of depending on the U.S. nuclear umbrella for its security. If Japan comes to support the standalone ban treaty, the nation would then need to essentially separate itself from the protection of the nuclear umbrella. If it seeks to both back this treaty and yet maintain the protection provided by the nuclear umbrella, Japan will inevitably struggle with other countries over the conditions in which nuclear weapons could be used, like pursuing exceptions to allow for the use of these weapons.

But if it adopts the framework agreement, Japan will gain the time to change its security policy while also participating in the framework convention, and moreover, will be able to promote the abolition of nuclear arms under these current circumstances.