First round of U.N. talks on nuclear ban treaty, Part 1 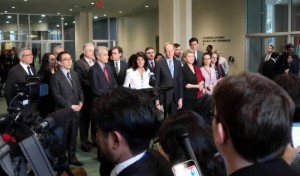 The first round of talks to establish a treaty that would outlaw nuclear weapons were held at United Nations headquarters in New York from March 27 to 31. This article reports on the significance and shape of the nuclear ban treaty, which is gradually gaining a tangible form.

At 10 a.m. on March 27, the same time the talks began, Nikki Haley, the U.S. ambassador to the United Nations, held a news conference at U.N. headquarters.

“We have to be realistic. Is there anyone that believes that North Korea would agree to a ban on nuclear weapons?” said Ms. Haley, speaking with passion in front of about 50 reporters from various nations who had flocked to the news conference. She asserted that a nuclear ban treaty would have an adverse effect on global security.

The 10-minute news conference was also attended by some 20 ambassadors including the ambassadors from the United Kingdom and French, both nuclear powers, and South Korea which relies on the U.S. nuclear umbrella for its security. No questions were permitted.

It was widely anticipated that the United States, which supports a gradual reduction of nuclear arms, would not participate in the talks to outlaw nuclear weapons. However, it was highly unusual that the United States took this sort of step to demonstrate its opposition to the U.N. negotiations. Why did it hold this news conference? A source within Japan’s diplomatic corps suggests the answer.

In the first advisory opinion that it rendered in 1996, the International Court of Justice (ICJ) stated that it could not definitively conclude whether the threat or use of nuclear weapons would be lawful or not in an extreme circumstance of self-defense, in which the very survival of a nation is at stake. It said, however, that in general, the threat or use of nuclear weapons should be considered contrary to the rules of international law. As a result, the ICJ left open a loophole for the nuclear weapon states to continue justifying their policy of nuclear deterrence. On the other hand, the nuclear powers appear to be concerned that, if a nuclear ban treaty enters into force, the ICJ is likely to determine that the use of nuclear weapons would be unlawful under any circumstances.

“While North Korea simply ignores all international laws, in such law-abiding nations as the United States, the United Kingdom, and France, where compliance with laws is a widely-accepted notion, a nuclear ban treaty could have an impact on their nuclear policies,” said the diplomatic source.

The International Campaign to Abolish Nuclear Weapons (ICAN), a non-governmental organization (NGO) which is encouraging all nations to create a nuclear ban treaty, unexpectedly welcomed the U.S. protest. The organization said that, thanks to Ms. Haley and the media coverage of her news conference, there is far more reporting on the treaty.

The fact that Western media outlets are covering issues involving U.N. discussions about nuclear disarmament is very unusual. The Review Conference of the Treaty on the Non-proliferation of Nuclear Weapons (NPT), which is held every five years, receives little coverage, and likewise, the U.N. talks on a nuclear ban treaty rarely attracted media attention before they began. However, the news conference staged by Ms. Haley resulted in breaking news over the Internet by the mainstream media. The following morning, The New York Times devoted roughly a quarter of a page to a report about the protest by the U.S. government and its allies, with a headline that included the word “boycott.” In listing the pros and cons of such a treaty, the newspaper introduced ICAN’s views to its readers for the first time.

Beatrice Fihn, the executive director of ICAN, said in a statement that the opposition expressed by Ms. Haley and U.S. allies “demonstrates how worried they are about the real impact of a nuclear ban treaty.” Ms. Fihn has a vision in which supporters of the negotiations will first extend the general public’s understanding of a ban on nuclear weapons and, with the support of public opinion, a global transformation to a security system that does not rely on nuclear arms can then be realized.

Unfortunately, though, the number of media reports concerning the negotiations has gradually declined since the first day of coverage and the public’s interest in the nuclear ban talks has only just been kindled. On March 31, the final day of the conference, a reporter from the Chugoku Shimbun asked Farnal Ghavam, 32, a woman from Canada who was visiting U.N. headquarters during a sightseeing trip, whether she knew about the talks. Ms. Ghavam responded that she was unfamiliar with the nuclear ban treaty, and only knows about the travel ban issued by U.S. President Donald Trump.