First round of U.N. talks on nuclear ban treaty, Part 3 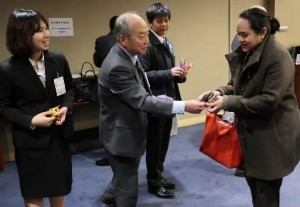 The first session of the United Nations conference to negotiate a ban on nuclear weapons, which took place over a five-day period at U.N. headquarters in New York, concluded on March 31. Toshiki Fujimori, 73, a resident of Chino, Nagano Prefecture and the assistant secretary general of Nihon Hidankyo (Japan Confederation of Atomic and Hydrogen Bomb Sufferers Organizations), handed out folded paper cranes, one by one, to the U.N. ambassadors as they left the venue. The gesture by Mr. Fujimori, who was exposed to the radiation released by the Hiroshima A-bomb when he was only a year old, was an expression of his deep gratitude for their efforts to abolish nuclear weapons.

“Despite opposition from the United States and its allies, the representatives of the participating nations and NGOs all worked together with the intent of realizing a nuclear ban treaty. I was strongly encouraged by all their efforts,” Mr. Fujimori said. On the opening day of the conference, he addressed the participants as a representative of the A-bomb survivors and made suggestions as to the type of language he would like to see included in the treaty. In his address, he said, “The treaty you will be negotiating today must reflect the desire to have ‘No More Hibakushas’ so that the world makes remarkable progress toward nuclear weapons abolition.” His appeal was made while holding in mind the regrets of countless A-bomb victims, including his sister who never returned from the site where she was mobilized to work, and the sufferings and wishes of the A-bomb survivors.

Austria, the vice chair of the conference, promptly responded to Mr. Fujimori’s speech. Ambassador Thomas Hajnoczi, the Permanent Representative of Austria to the United Nations office at Geneva, said that he will urge the participating countries to consider including the term “hibakusha” in the preamble of the treaty. The Japanese word “hibakusha” refers to A-bomb survivors and others exposed to radiation.

Like Mr. Fujimori, Akira Kawasaki, the executive committee member of Peace Boat, a Tokyo-based NGO, called on the conference to create a preamble that can be deemed a “No More Hibakusha Treaty” and to make the treaty a legacy of all A-bomb survivors. He said, “In anticipation of a future in which there will be no more A-bomb survivors, we must incorporate the survivors’ strong conviction that ‘nuclear weapons must never be allowed’ into the rules of international law.”

Nine years ago, Peace Boat established a program in which A-bomb survivors visit various countries in a large passenger ship and talk about their A-bomb experiences. Since then, the organization has helped bolster the momentum for banning nuclear weapons. While Mr. Kawasaki recognizes the powerful presence of the A-bomb survivors in talking about the inhumane nature of nuclear weapons through their own experiences, he also notes that their physical strength has been in gradual decline since the average age of the survivors reached 80.

For that reason alone, Mr. Kawasaki agrees with the non-nuclear nations that have been leading the conference talks and seeking an early consensus on a nuclear ban treaty. The idea, he said, is to first put the treaty into force, have it help establish the universal norm that nuclear weapons are inhumane and that they must never be used, and then induce the nuclear weapon states to join the treaty, too. He emphasized that a key part of this process involves creating a treaty that is fully on the side of the A-bomb survivors and can motivate the people of the world to work for the nuclear ban until all nations participate in the treaty.

However, along with the United States, Russia, and other countries that hold nuclear weapons, nations like Japan, which depend on the U.S. nuclear umbrella for its security, have refused to even take part in the treaty talks. Some Japanese experts on nuclear issues have deep-seated doubts about whether the treaty can be implemented in an effective manner and whether all the countries of the world would actually join the treaty. Still, Japanese NGOs taking part in the conference have been seeking ways to overcome this dilemma.

The Peace Depot, an NPO based in the city of Yokohama, issued a written statement with the appeal to all nations of the importance of pursuing nuclear-free zones along with a treaty prohibiting nuclear weapons. The organization points to the situation in Northeast Asia, in particular. The idea is that creating a nuclear-free zone in Northeast Asia would be a way to resolve the problem of North Korea’s nuclear and missile development program, which has been cited as the main reason for the reluctance of the United States, Japan, and other nations to participate in the U.N. talks.

From Hiroshima, Yasuyoshi Komizo, the chairperson of the Hiroshima Peace Culture Foundation, took part in the conference as the representative of Mayors for Peace (for which Hiroshima Mayor Kazumi Matsui serves as president). Mr. Komizo stressed that, to bring the nuclear powers into the negotiations, it is vital to pursue verification measures which will ensure that all nations have eliminated their nuclear arsenals. This key step is based on the reality that the nuclear weapon states will not be willing to relinquish their nuclear arms unless they can verify that other countries have also done away with their weapons.

At this first round of talks, citizens from Japan, the only nation to have suffered nuclear attack, were proactively involved. Some of the conference participants have long had feelings of frustration with the Japanese government, which should have assumed a leading role in the negotiations. Diplomatic sources note, however, that the Japanese government says it has collected information and consulted with some of the participating nations separately from the talks.

An international norm that reflects the deep desire of the A-bomb survivors that “No one else should ever suffer as we have” is set to be established without the participation of the Japanese government and spread across the world. The nuclear ban treaty currently being crafted is expected to be adopted by July 7 when the next round of U.N. talks closes. As Mr. Fujimori left New York, he headed home with both hopes for a nuclear-free world and resentment toward the Japanese government.