First round of U.N. talks on nuclear ban treaty, Part 2 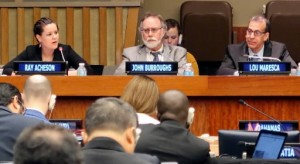 After delivering a speech on the fourth day of the conference to establish a treaty to ban nuclear weapons, Ray Acheson, 34, looked satisfied and said that productive discussions were taking place, as she had expected. Ms. Acheson, who has been engaged in the antinuclear movement, spoke as an expert on issues involving a nuclear ban treaty at the conference at U.N. headquarters in New York.

Ms. Acheson is one of the core members of Reaching Critical Will (RCW), the disarmament program of a New York-based international women’s organization. RCW has been working with proponents of the proposed treaty, including Mexico and Austria. She prepared a booklet describing the ideas for a treaty that would outlaw nuclear arms and impose a ban on many activities related to these weapons. Prior to the gathering, she also provided explanations about this to the countries concerned. During the five-day conference, RCW supported the discussions by handing out a summary of the previous day’s discussions to ambassadors as they walked into the meeting room.

With the nuclear powers not in attendance, the first round of talks was led by the non-nuclear nations from beginning to end. There has been near-universal agreement on the prohibitions of developing, producing, acquiring, stockpiling, deploying, and using nuclear weapons, as well as assisting, encouraging, and inducing prohibited acts. The participants called for a prohibition on possessing nuclear arms without exceptions, a stipulation different from the provisions of the Nuclear Non-proliferation Treaty (NPT), which recognizes the United States, Russia, the United Kingdom, France, and China as nuclear weapon states.

Ms. Acheson learned about the humanitarian consequences of the use of the atomic bomb when she visited the Peace Memorial Museum in Hiroshima seven years ago. On the cover of the booklet she made for the conference is a picture of paper lanterns floating down the river near the A-bomb Dome on the anniversary of the atomic bombing. She said that she has been inspired by the efforts A-bomb survivors have long made to abolish nuclear weapons.

Concerning the prohibitions RCW proposed at the conference, opinions were divided as to whether or not some items should be specified in the treaty. Ireland argued that “development could also encompass testing,” and Austria advocated that “the prohibition on assistance would also apply to financing.” The participants are seeking simplicity so that the treaty can be concluded as early as possible. This reflects the heavy influence of the United States, though that country did not participate in the conference.

U.S. President Donald Trump has expressed his intention to strengthen his nation’s nuclear arsenal and there is concern that Washington may try to break down the cohesion among the conference participants. It has also been pointed out that the United States could put pressure on discussions at the U.N. by cutting its contribution to the international body, among other actions. Proponents of the treaty hope to create international rules at an early stage in the process to prevent the United States from undercutting this trend toward disarmament.

Switzerland and some other nations have called for additional time to craft the treaty, but they are a minority among the more than 115 nations that took part in the talks. Elayne Whyte Gómez, the president of the conference, is aiming to have the draft of the treaty adopted during the next round of talks, scheduled from June 15 to July 7. During the first round of negotiations, the participants were unable to devise a plan for involving the nuclear powers, one of the most important concerns.

Based on Austria’s proposal, it would not be necessary for a nation to have completely disposed of its nuclear arsenal in order to join the treaty. Austria has suggested that a nuclear weapon state should be allowed to join the treaty on the condition that it has set a detailed plan to destroy its nuclear arms, including a time frame. While some nations argue that a nuclear power must dispose of its nuclear weapons before joining the treaty, Austria is seeking to ease this requirement. The challenge is whether it can make a more detailed proposal that will win the approval of other nations.

Among the members of the North Atlantic Treaty Organization (NATO), whose members rely on the U.S. nuclear umbrella for their security, only the Netherlands attended the first round of talks and stated that “Any ban must be compatible with our obligations as a member of NATO.” But it also said that it supports the idea of banning nuclear weapons and that it “looks forward to in-depth discussion.” To enhance the effectiveness of the treaty, it is crucial to provide nations that rely on nuclear arms with sufficient motivation to join the treaty in the near future.