Key elements of the draft treaty that would outlaw nuclear weapons 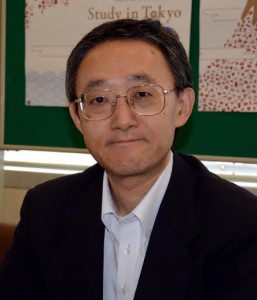 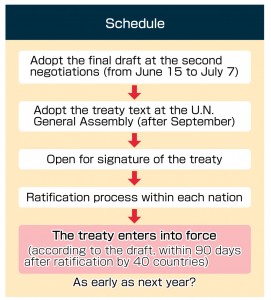 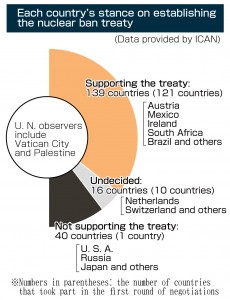 Based on the lessons learned from the inhumane damage caused by the atomic bombings of Hiroshima and Nagasaki, the international community is now seeking to establish a treaty that would outlaw nuclear weapons. The Preamble of the draft treaty, with 21 articles in total, refers to the sufferings of the atomic bomb survivors and Article 1 prohibits the use of nuclear arms. The goal is for all nations of the world to participate in this nuclear ban treaty. This article summarizes the key elements of the treaty and looks ahead at the second round of talks on this agreement, which will begin at the United Nations on June 15.

The Preamble: Reference to A-bomb survivors

The nuclear weapon states and the Japanese government are opposed to a treaty outlawing nuclear arms, arguing that such a treaty would destabilize the Nuclear Non-Proliferation Treaty (NPT) regime. However, the Preamble clearly states that the treaty would complement and strengthen the NPT regime, which stipulates the obligation to negotiate nuclear disarmament in good faith.

Article 1: Nuclear weapons must not be used under any circumstances

The vital point of Article 1 is the stipulation that nuclear weapons are not to be used under any circumstances. No existing treaty, not even the NPT, includes this provision. In 1996, the International Court of Justice (ICJ) stated that it could not definitively conclude whether or not the threat or use of nuclear weapons would be illegal in the extreme case of self-defense where the very survival of a nation is at stake. With the ICJ’s advisory opinion in mind, the draft treaty clearly articulates a complete prohibition on the use of nuclear weapons.

That prohibition is defined as also applying to nuclear experiments “that involve nuclear explosions,” in line with the Comprehensive Test-Ban Treaty (CTBT). Subcritical nuclear experiments, which the U.S. has repeatedly carried out, could be prevented with a provision that involves prohibiting the development of nuclear weapons, but this point is still open to debate.

On the other hand, “the threat to use nuclear weapons” has not been included in the draft as a prohibited action. Because the possession and use of nuclear weapons is expressly prohibited, the threat to use nuclear arms could be automatically construed as prohibited as well, but Japanese non-governmental organizations (NGOs) want this point in writing, too, in order to stress the rejection of nuclear deterrence.

Currently, Japan relies on the U.S. nuclear umbrella for its security. Since the draft prohibits countries from seeking or receiving assistance in connection with the potential use of nuclear weapons, Japan’s position runs counter to the provisions of the treaty. To join this treaty, Japan would need to move away from its dependence on the nuclear umbrella.

Article 4 and Article 5: Two ways for the nuclear states to join the treaty

Article 4 and Article 5 describe two ways for the nuclear weapon states to take part in the treaty. Currently, though, the treaty discussions are being led only by non-nuclear states, and the involvement of the nuclear states would be essential for the process of dismantling the weapons themselves. In addition, the protocols for verifying compliance have not yet been worked out.

Article 4 states that, in principle, a nation that joins the treaty must have fully disposed of its nuclear arsenal. Former nuclear states are then required to accepted inspections of nuclear sites by the International Atomic Energy Agency (IAEA). South Africa, which completely abolished its nuclear weapons in 1991, serves as a successful example. However, in the case of South Africa, other nuclear nations with the know-how were involved in the inspections and some experts believe that inspections by the IAEA alone would be difficult to carry out, technically, under current conditions.

Article 5 describes a more flexible system. The nuclear nations, even if they have not yet joined the treaty, would facilitate nuclear disarmament while participating in the Conference of State Parties. By negotiating in a flexible manner, and signing additional protocols that lay out plans for the destruction of nuclear weapons and inspections, including a time frame, nations armed with nuclear weapons would ultimately join the treaty, too. Many of the nations involved place strong importance on creating a system that will define at what point former nuclear nations can be admitted to the treaty.

Non-nuclear weapons states would also need to accept safeguards by the IAEA when they join the treaty, in line with protocols under the NPT regime, in order to verify that no nuclear materials are being diverted to military use.

Article 6 includes medical care and psychological support to victims as well as assistance for addressing contaminated areas of the environment as a result of nuclear weapons use or testing. While substantial assistance would be effective for emphasizing the inhumanity and illegality of nuclear arms, it is unclear who would be obligated to provide this support or whether it could also be retroactive.

Treaty members would also take steps domestically, including legislation, and there would be administrative penalties for prohibited activities. There are growing calls among NGOs that support this treaty to spread social norms by prohibiting funding for nuclear-related companies.

Article 9 and Article 16: Ratification and meetings

The treaty would come into force after being ratified by 40 nations. The CTBT, adopted by the U.N. General Assembly in 1996, designated the benchmark of 44 countries, including the nuclear states, to conclude the treaty. While 166 nations have ratified that treaty to date, it still hasn’t gone into effect because some nations, including two nuclear powers, the United States and China, have yet to ratify it. Taking into account the lessons learned from this experience, backers of the nuclear ban treaty are seeking different criteria for the agreement to come into effect, with a certain number of non-nuclear weapon states serving as the minimum benchmark.

Treaty members would meet every two years and a review conference would take place five years following the treaty’s entry into force. Non-members of the treaty, including the nuclear states and nations still under the nuclear umbrella, could also take part in these meetings as observers. Responsibility for the costs involved in such gatherings is another concern still yet to be addressed.

According to the International Campaign to Abolish Nuclear Weapons (ICAN), a non-governmental organization (NGO), 139 countries currently support establishing the nuclear ban treaty, 40 countries do not support the treaty, and 16 countries are undecided. ICAN’s view comes from each country’s stance on the resolution adopted last year at the U.N. General Assembly to begin these negotiations and their participation in the first round of talks held last March.

If the final draft of the treaty is adopted at the second round of negotiations, proponents will seek to adopt the treaty text at the U.N. General Assembly this fall.

The legal binding force of the treaty would apply only to the treaty members and, in this respect, its effectiveness is being questioned. At the first preparatory committee for the 2020 NPT Review Conference held last month in Vienna, Austria, the United States and Russia expressed their opposition to establishing such a treaty. Foreign Minister Fumio Kishida proposed that a meeting of the Group of Eminent Persons be held to bridge the divide between proponents and opponents, insisting that a legal framework should be introduced only after the world’s nuclear weapons are reduced to a precious few as a result of gradual nuclear disarmament.

Treaty is “incompatible” with the nuclear umbrella

We asked Toshinori Yamada, a board member of the International Association of Lawyers Against Nuclear Arms (IALANA) and a lecturer in international law at Meiji University, about the significance of the draft treaty and the challenges that lie ahead. Below are his comments.

The draft treaty is strong. It specifies prohibitions on the use, development, and production of nuclear weapons, provisions that are not stated in the NPT. While some of the details must still be worked out, like whether to articulate a prohibition on using nuclear weapons as a threat, the contents are clearly incompatible with the nuclear policies of the nuclear weapon states and the nations under their nuclear umbrella.

The important point is that the draft has been created based on the interpretation that the use of nuclear arms, under any circumstances, goes against current international law. The need to obey international law has been confirmed at the NPT Review Conference. Nuclear nations that choose not to join the nuclear ban treaty would be asked to explain why the use of nuclear weapons is not illegal at the NPT conference. This could put pressure on them to take stronger action for nuclear abolition.

As for the A-bomb survivors, their grassroots efforts have them legally positioned as the “public conscience,” stressing the unlawfulness of nuclear weapons and the need to abolish them.

Encouraging the nuclear states to take part in the treaty process is a major challenge. One way would be for treaty members to accept inspections that are stricter than the NPT protocols to comply with their non-proliferation duty, and in return, the nuclear states would advance nuclear disarmament.

Persistent efforts to expand people’s understanding of the inhumane nature of nuclear arms and the necessity of prohibiting these weapons is also key. I hope that education on nuclear disarmament is discussed at the next round of negotiations. This is one area where the Japanese government, which is reluctant to participate, could contribute immediately.