The Key to a World without Nuclear Weapons: One year after Obama’s visit to Hiroshima, Part 1 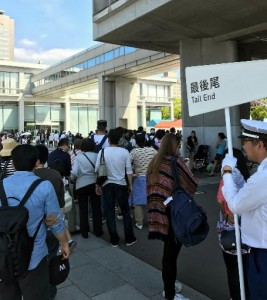 Impact of Obama’s visit to Hiroshima

May 27 will mark the day, one year ago, that Barack Obama came to Hiroshima, the first sitting U.S. president to visit this city. Although his visit to Hiroshima drew considerable attention, both at home and abroad, he left office having taken few concrete steps toward creating the “world without nuclear weapons” that he had called for earlier in his presidency. Now, with the advent of President Donald Trump’s administration, which has indicated a desire to strengthen America’s nuclear arsenal, there are growing tensions in the international community, including over North Korea’s efforts to develop its missiles and nuclear arms. In this series, the Chugoku Shimbun will consider the significance of “May 27” from the point of view of Hiroshima’s A-bomb survivors and citizens.

Lack of enthusiasm for signature drives

On May 4, during the Golden Week holidays, there was a long line of visitors at the entrance to the east building of the Hiroshima Peace Memorial Museum in Naka Ward, Hiroshima. At its peak, there were some 100 people lined up from the entrance to the signboard indicating the end of the line. The number of visitors on this recording-setting day was 12,736, an increase of 35% compared to the same day a year ago.

In the museum, the paper cranes that Mr. Obama brought with him on his visit last year are on display. The number of visitors to the museum in fiscal year 2016 exceeded 1,730,000, marking a 25-year high. This trend has continued following the opening of the new exhibit in the east building on April 26. Museum staff say that Mr. Obama’s visit, and the paper cranes he left behind, have provided a welcome opportunity for people who were indifferent toward the atomic bombings to visit the museum and learn about the devastation of the A-bomb attack on this city.

The legacy of Mr. Obama’s visit is seen in the museum guestbook in which visitors can write about their impressions after touring the museum. One comment, left on June 1, 2017, says, “When I watched Mr. Obama’s visit to Hiroshima on TV, I realized that I had never been to Hiroshima, even though I’m Japanese, and so I decided to visit Hiroshima and the museum.” According to the museum, there are many comments like this, where Japanese visitors reflect on their own lives.

While welcoming the stronger interest in Hiroshima, and the greater number of visitors to the museum, Takaaki Morikawa, 78, a resident of Nishi Ward, also expressed frustration.

Mr. Morikawa was exposed to the “black rain” containing radioactive fallout from the atomic bomb and has shared his account of the atomic bombing in a number of nations overseas. In the countries he visits, he also gathers signatures as part of a project of Mayors for Peace (for which Hiroshima Mayor Kazumi Matsui serves as president), which is calling for the total elimination of nuclear weapons by the year 2020 by concluding a treaty that would outlaw all nuclear arms. In the information lounge on the first floor of the renovated east building, there is a table for people to offer their signatures. To date, however, very few people have done so.

In the speech he made in Hiroshima on May 27, 2016, Mr. Obama said, “Among those nations like my own that hold nuclear stockpiles, we must have the courage to escape the logic of fear and pursue a world without them,” and his words raised people’s hopes for the abolition of nuclear weapons. Mr. Morikawa was among the throng that watched Mr. Obama’s motorcade drive past during his visit to Hiroshima. Having felt the excitement of Hiroshima citizens as they welcomed the president to the city, he now senses the disparity between the enthusiasm at that time and the results of the signature campaign.

Mr. Morikawa said, “Offering their signature is the first, immediate step that people becoming aware of this issue can take toward abolishing nuclear weapons. Although a single signature from one person is a very small step, if a lot of signatures are collected, it can be enough to change the politics of the situation.” He feels that Mayors for Peace’s vision and signature campaign have not yet reached a sufficient number of people.

Another signature drive, called the Hibakusha Appeal, is also failing to attract a significant number. This campaign, proposed by Nihon Hidankyo, the Japan Confederation of A- and H-bomb Suffers Organizations, calls for all nations of the world to conclude a treaty that would ban nuclear arms. It started in April 2016 and has so far collected some 1,720,000 signatures. However, this figure pales in comparison to the nationwide signature drive which gathered more than 30 million signatures in a little more than a year in response to the 1954 Bikini Incident.

In March 2017, the first round of negotiations to establish a treaty to outlaw nuclear weapons was held at United Nations headquarters in New York. Meanwhile, before these negotiations began, some members of the Hiroshima public took the initiative to hold a first gathering for young people to learn more about the treaty and strengthen their interest in this issue. Mayors for Peace is now considering the idea of organizing a joint event with the Hibakusha Appeal. The secretariat staff for Mayors for Peace says that they will promote the signature drives so that people who visit Hiroshima to see Mr. Obama’s paper cranes will feel more motivated to provide their signature.