The Key to a World without Nuclear Weapons: One year after Obama’s visit to Hiroshima, Part 2 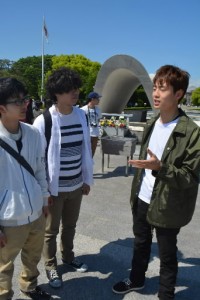 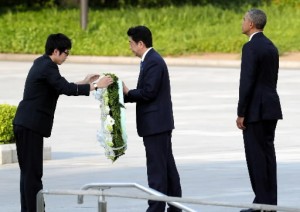 On May 4, a national holiday in Japan, Kota Tanaka, 18, a first-year university student living in Tokyo, returned to his hometown of Hiroshima and visited the Hiroshima Peace Memorial Park with former classmates to look back on his experience of last May 27 when former U.S. President Barack Obama paid a visit to the A-bombed city. Mr. Tanaka said, “I passed a wreath of flowers to the Japanese prime minister, with the hope that Japan would make a strong appeal for nuclear abolition and take action as the A-bombed nation.”

A year ago, Mr. Tanaka was a third-year student at Shudo High School and played a part that day at the Peace Memorial Park by handing the wreath of flowers to Prime Minister Shinzo Abe. Mr. Abe then offered the wreath to the Cenotaph for the A-bomb Victims at the ceremony to welcome Mr. Obama to the city. He was chosen to fill this role from among the group of high school students who were sent to the United States by Mayors for Peace (for which Hiroshima Mayor Kazumi Matsui serves as president) in conjunction with the Review Conference of the Nuclear Non-proliferation Treaty (NPT) two years ago. When Mr. Abe stood behind the podium after Mr. Obama spoke and said, “We are determined to realize a world free of nuclear weapons,” Mr. Tanaka felt the conviction of Mr. Abe’s words.

However, in the 12 months since that day, the Abe administration and the ruling party have been touting Mr. Obama’s visit in the context of “reconciliation” and “reinforcing its alliance” with the nuclear superpower, the country that dropped the atomic bomb.

Last July, when the Upper House election was held, the ruling Liberal Democratic Party used a large photo of Mr. Obama and Mr. Abe shaking hands in front of the cenotaph in Hiroshima to promote its campaign platform. But this statement, which was signed by Mr. Abe and placed near the photo, included no mention of nuclear abolition, instead describing Japan’s security legislation and the U.S. alliance. Meanwhile, an embrace photographed between Mr. Obama and an A-bomb survivor was reported by overseas media as a symbol of “reconcilation between Japan and the United States.” Mr. Abe’s visit to Pearl Harbor, Hawaii, at the end of last year, also strengthened this view.

This past February, Mr. Abe spoke for the first time with Donald Trump, the new U.S. president, who has made plain his desire to strengthen the U.S. nuclear arsenal. The two leaders reaffirmed that U.S. military might, including the nuclear umbrella, will continue to serve Japan as a deterrent. While the Trump administration now wavers on the goal of a world free of nuclear weapons, the Japanese government has not pushed back against this contrary course.

In high school, Mr. Tanaka was engaged in a signature drive to advance the aim of a treaty that would outlaw nuclear arms. In Tokyo, where he now lives as a college student, he said he has far fewer opportunities to see or hear about antinuclear efforts and peace activities undertaken by A-bomb survivors and citizens. Meanwhile, the threat of North Korea’s missiles and nuclear weapons has come up in conversations with young people his age. With the former high school classmates he met after some time apart, Mr. Tanaka expressed his wish in front of the cenotaph, saying, “Now that Mr. Obama is no longer the president, I’d like the prime minister of the A-bombed nation to work a lot harder on peaceful diplomacy and the abolition of nuclear weapons. I don’t want to see Mr. Obama’s visit to Hiroshima end up as a temporary spike in people’s interest in these issues.”

But even at the time of Mr. Obama’s visit, some people in Hiroshima held a critical view of this development. Haruko Moritaki, 78, the co-chair of a citizens’ group called the Hiroshima Alliance for Nuclear Weapons Abolition (HANWA), still feels angry. Ms. Moritaki said, “His visit left a very sour aftertaste because the A-bombed city was used to make an appeal for the U.S.-Japan alliance, which champions nuclear deterrence. We find it intolerable that the illegal massacre of the atomic bombing and the appeal for abolishing nuclear weapons have been covered up by the idea of reconciliation.”

On May 27, exactly one year to the day since Mr. Obama’s visit, some citizens’ groups, including HANWA, will gather in Hiroshima to express support for a treaty to outlaw nuclear weapons. They hope that this gathering can draw the interest of other citizens and that the Japanese government, representing the A-bombed nation, can truly take steps to advance the aim of nuclear abolition.