The Key to a World without Nuclear Weapons: One year after Obama’s visit to Hiroshima, Introduction 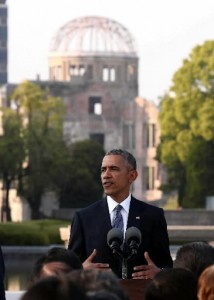 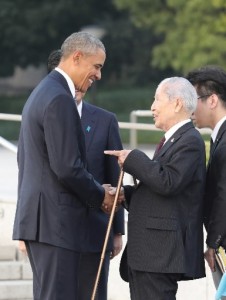 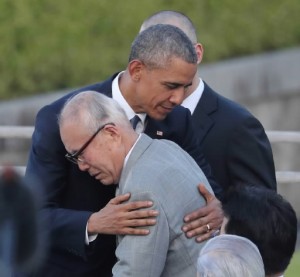 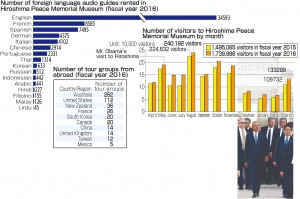 On May 27, 2016, Barack Obama became the first sitting president of the United States, the country that dropped the atomic bomb on Hiroshima, to visit this city. “We shall not repeat the evil” is the phrase inscribed on the Cenotaph for the A-bomb Victims. The A-bomb survivors had hoped that Mr. Obama’s visit would serve as a step forward for realizing the abolition of nuclear weapons, but no progress in nuclear disarmament has been made over the past year and people are now feeling deep disappointment in the nuclear superpower. Still, the survivors continue to appeal for nuclear abolition and many people in and out of Japan have come to the Hiroshima Peace Memorial Museum to learn about the atomic bombing and nuclear weapons. With the global state of nuclear arms growing more dangerous, action is now urgently needed.

Mr. Obama and his administration called for a world without nuclear weapons. During his eight-year presidency, however, the former president did not reduce the size of the U.S. nuclear arsenal and consistently opposed a treaty to outlaw nuclear weapons. He continues to be criticized over the disparity between his words and his actions.

After Mr. Obama’s visit to Hiroshima, whether his administration would adopt a “no-first-use” declaration, which could help change U.S. nuclear strategy significantly and restrain the risk of a nuclear exchange, became a focal point. However, this idea did not materialize. John Kerry, who was secretary of state at the time, was reportedly against the “no-first-use” declaration out of consideration for Japan and South Korea, nations that expressed grave concerns that the nuclear deterrent for U.S. allies would be weakened amid China’s military expansion and North Korea’s nuclear ambitions.

Mr. Obama has handed over the nuclear button to his successor without adding any further restraints to the world’s most powerful nuclear arsenal. And since leaving office, he has not made any noteworthy statements on the issue of nuclear weapons.

Even before his inauguration in January, President Donald Trump posted on Twitter that he favors fortifying the U.S. nuclear arsenal. He has also indicated that he will pursue a new Nuclear Posture Review to ensure that the U.S. nuclear deterrent is “modern and robust.” There is even the possibility that the phrase “a world without nuclear weapons,” which appears at the beginning of the Nuclear Posture Review formulated by the Obama administration, will be removed from this basic document of U.S. nuclear policy.

Meanwhile, the United States is also increasing its military pressure on North Korea. Mr. Trump has shown no signs of hearing the appeal of the A-bombed city, which calls for the abolition of nuclear weapons and lasting peace in the world.

Sunao Tsuboi, 92, chairman of the Japan Confederation of A- and H-Bomb Sufferers Organization (Nihon Hidankyo)

I still remember how warm and firm Mr. Obama’s hands were. I could feel from our handshake that he’s a man with a big heart who thinks of all human beings. I’d like him to visit Hiroshima again. If that happens, I’d recommend that he visit Nagasaki, too, and I’d like to talk with him again, this time in Nagasaki.

I’m more worried than I was a year ago, considering the words and actions of President Trump and the brutality of the militant group that calls itself the Islamic State. I deplore the chaotic state of the world. The negotiations at the United Nations to establish a treaty to ban nuclear weapons are just the beginning of the beginning. We are at a crucial crossroads and the challenge is whether or not the human species can survive. We must confront the problem of nuclear weapons and focus on peace.

Everyone became a victim

I fear that a nuclear war may become a reality. Seeing the rigid postures of North Korea and the United States, it seems like anything could happen. There’s no guarantee that Japan is protected by the U.S. nuclear umbrella. What’s important is to build international public opinion so that the leaders of the nuclear powers are deterred from pressing the nuclear button.

I sincerely hope that leaders from around the world will visit the A-bombed city, as Mr. Obama did. Everyone, regardless of nationality or which side they were on during the war, became a victim beneath those mushroom clouds. The A-bomb survivors are still suffering from the effects of the bomb’s radiation, and the tragedy would be much worse if nuclear weapons are involved. We must hold this danger in mind to help restrain the use of nuclear weapons.

The number of visitors to the Hiroshima Peace Memorial Museum, in Naka Ward, reached a record high during the last fiscal year. The number of visitors rose by more than 40% in June, when the museum began to display the paper cranes folded and presented by Mr. Obama, and July, compared to the same months in 2015. The museum received 366,779 international visitors from 27 countries and regions, with 551 tourist groups, setting a record high for the fourth consecutive year. Among them, visitors from nuclear nations including the United States, France, and China are notable. The museum’s audio guides, which are available in 16 languages, were rented by more people, in nine languages, compared to the last fiscal year.

The word “Obama” is often seen in the museum guestbook, where visitors can write about their thoughts and feelings at the end of their time in the museum. One American wrote on July 4, 2016 that Mr. Obama’s visit to Hiroshima was a source of “pride.” Others have commented that Mr. Obama should have apologized for the atomic bombing. There was also a comment on July 11, 2016, made in Chinese, asking when Japan’s prime minister would visit Nanjing, China.

May 28
Mr. Trump posts on Twitter, wondering if Mr. Obama discussed the surprise attack on Pearl Harbor, in which thousands of people lost their lives, with Prime Minister Shinzo Abe.

June 6
Four paper cranes presented by Mr. Obama, along with the message he wrote in the museum guestbook, are exhibited at the Hiroshima Peace Memorial Museum.

July 10
American media reports that the Obama administration is reviewing U.S. nuclear policy, including the possibility of a “no-first-use” declaration, budget cuts to plans to modernize the U.S. nuclear arsenal, and a U.N. Security Council resolution that would ban nuclear testing.

July 27
Seven A-bomb survivors’ organizations in Hiroshima Prefecture join forces for the first time in a global signature drive near the A-bomb Dome, calling for a treaty that would ban and eliminate all nuclear arms. Sunao Tsuboi, the chairman of Nihon Hidankyo, also takes part.

August 18
Terumi Tanaka, the secretary general of Nihon Hidankyo, welcomes the Obama administration’s decision to consider a “no-first-use” declaration, calling it “half a step forward” toward abolishing nuclear weapons, while saying that Mr. Abe’s opposition is “inappropriate.”

September 13
The U.S. military dispatches a B1 strategic bomber, which has removed the capability to carry nuclear weapons, to South Korea, a move seen as an attempt at deterrence by conventional weapons. The bomber is dispatched again on September 21.

September 20
President Obama says “we must pursue a world without nuclear weapons” in a speech he makes at the U. N. General Assembly and criticizes North Korea for carrying out a nuclear test.

September 23
The U.N. Security Council holds a meeting on the Comprehensive Nuclear-Test-Ban Treaty (CTBT) and adopts a resolution, led by the United States, which urges all nations to refrain from conducting any type of nuclear-weapon test explosion.

September 26
Mikiso Iwasa, the chairperson of Nihon Hidankyo, and others hold a signature drive in Shibuya Ward, Tokyo.

October 27
The First Committee of the U.N. General Assembly adopts a resolution to start negotiations to establish a “nuclear ban treaty.” Japan and the United States are among the nations that oppose this resolution. Beforehand, the United States sends a letter to the member states of the North Atlantic Treaty Organization (NATO), requesting that they oppose the resolution and not take part in the negotiations.

November 8
Mr. Trump is elected president of the United States.

December 1
Hiroshima Peace Memorial Museum receives a letter of thanks from Mr. Obama, dated November 21. In the letter he writes: “We have a shared responsibility to look directly into the eye of history and ask what we must do differently to prevent such suffering from ever happening again.”

January 20
Mr. Trump is inaugurated as the 45th president of the United States and Mr. Obama leaves office.

February 10
Mr. Tanaka visits the Foreign Ministry with other members of antinuclear groups in Hiroshima and Nagasaki and submits a statement, addressed to Foreign Minister Fumio Kishida, to Parliamentary Vice-Minister Shunsuke Takei, calling on Japan to assume a leadership role to realize a nuclear weapons convention.

February 23
Mr. Trump expresses his intention to strengthen the U.S. nuclear arsenal to maintain its dominance in an interview with Reuters. He also suggests that the New Strategic Arms Reduction Treaty (New START) should be reviewed.

March 27
Negotiations to establish a treaty to ban nuclear weapons began at U.N. headquarters in New York. Nikki Haley, the U.S. ambassador to the United Nations, holds a press conference outside the venue along with ambassadors from France, United Kingdom, and other countries, criticizing and boycotting these negotiations. Japan, too, does not take part in the talks.

March 27
Toshiki Fujimori, the assistant secretary general of the Japan Confederation of A- and H-Bomb Sufferers Organizations, delivers a speech during the U.N. negotiations as a representative of the A-bomb survivors. He mentions his sister who was killed by the A-bomb while working as a mobilized student, and his desire that a nuclear ban treaty be signed by all nations.

April 6
The Trump administration orders a strike with Tomahawk cruise missiles on a Syrian government airbase, where chemical weapons are reportedly stored. The Syrian regime, led by Bashar al-Assad, is believed to have used chemical weapons on civilians.

April 26
The Trump administration issues a statement saying that North Korea, in continuing to develop its missiles and nuclear arms, is “an imminent security threat” and “the top diplomatic priority.”

May 12
The first session of the Review Conference of the Treaty on the Non-proliferation of Nuclear Weapons (NPT) Preparatory Committee closes. The U.S. again criticizes the Review Conference, citing the threat from North Korea. The chairperson’s summary statement includes both the pros and cons of the treaty.