Treaty on the Prohibition of Nuclear Weapons is Adopted, Part 3 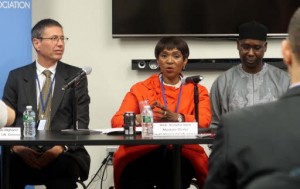 Door is left open for nuclear nations, but they rebuff the treaty

A treaty that outlaws nuclear weapons was adopted on July 7 with the support of many non-nuclear nations after negotiations at United Nations headquarters in New York. The Chugoku Shimbun examines the significance of this agreement and subsequent steps for realizing a world free of nuclear arms.

“It’s our responsibility to meet the wishes of the atomic bomb survivors of Hiroshima and Nagasaki. To have voted ‘no’ would have been a slap in the face to the survivors and victims,” South African Ambassador Nozipho Joyce Mxakato-Diseko, who oversees disarmament issues, said on July 7 at a press conference at United Nations headquarters in New York after the treaty to ban nuclear weapons was adopted.

Many of the member nations expressed support for her proposal, hoping that the nuclear weapon states will join the treaty at the earliest opportunity. The Chemical Weapons Convention, which took effect in 1997 to regulate another type of weapon of mass destruction, sets a deadline of 10 years, in principle, for the destruction of a nation’s chemical weapons. The deadline involving the nuclear ban treaty, on the other hand, could be decided in negotiations between a nuclear nation and the state parties to the treaty. The supporters of the treaty have compromised with the nuclear weapon states in that those nations can take a more gradual approach to nuclear disarmament, a path that they have insisted upon.

“The time has come,” said Ms. Mxakato-Diseko, urging the nuclear nations to join the treaty and relinquish their nuclear arsenals. Sitting beside her was Thomas Hajnoczi, the ambassador from Austria, who nodded as she spoke. The vice president of the conference, Mr. Hajnoczi encouraged the participants to mention “hibakusha” in the preamble to the treaty. He also expressed concern about the risks of a nuclear explosion due to accident or misuse.

Mr. Hajnoczi called for these risks to be included in the treaty at the second round of talks and they became part of the preamble, too. He also voiced his support for the proposal made by South Africa that will permit the nuclear nations to join the treaty with the stipulation that they agree to immediately remove their nuclear weapons from operational status.

The United States and Russia are each able to launch about 1,000 nuclear missiles at a moment’s notice. The treaty has the capacity to reduce the risks of accidental nuclear war or detonation and this point is being emphasized in the hope of appealing to public opinion in the countries that rely on the nuclear deterrent. Mr. Hajnoczi stressed that humankind would be safer in a world without nuclear weapons, an aim that could be achieved through the nuclear ban treaty.

The United States was absent from the negotiations on July 7, the day the treaty was adopted. Afterward, the United States, along with the United Kingdom and France, issued a joint statement that said they have no intention of joining the treaty and that “the ban treaty is incompatible with the policy of nuclear deterrence, which has been essential to keeping the peace in Europe and North Asia for over 70 years.”

The Netherlands, the only nation from the North Atlantic Treaty Organization (NATO), whose members rely on the U.S. nuclear umbrella for their security, to take part in the talks, hardened their position through the negotiations. While they were appreciative of the flexibility of the treaty’s terms so that nuclear nations would also be able to join the agreement, they made no concessions on their insistence that the treaty be compatible with NATO policy. In the end, they opposed the adoption of the treaty and prevented the vote from being unanimous.

The nuclear powers have created a myth about nuclear weapons in that threats to use these weapons will restrain other countries from armed aggression and thus make the world a safer place. However, the legitimacy of this myth will be called into question when the 122 member states ratify the treaty and it comes into effect. One expert said that the treaty itself may not have an immediate effect on nuclear arms reduction, but it could help break down the myth and lead, long term, to the elimination of nuclear weapons.

Former U.S. Defense Secretary William Perry voiced his support for the treaty, saying in a statement: “Though the treaty will not have the power to eliminate existing nuclear weapons, it provides a vision of a safer world.” He was one of the four elder statesmen that advised former U.S. President Barack Obama on nuclear matters and, by pointing out the risks of accidental nuclear war, influenced Mr. Obama’s call for “a world without nuclear weapons.”

Joseph Cirincione, the president of the Ploughshares Fund, a public grantmaking foundation in the United States, is an expert in nuclear reduction and non-proliferation. Pointing out the high risks of a nuclear explosion through an accident or improper use, Mr. Cirincione said that the belief that nuclear weapons can sustain security is misguided and that the adoption of the nuclear ban treaty is a historic step toward stigmatizing this weapon of mass destruction.