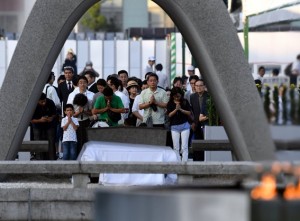 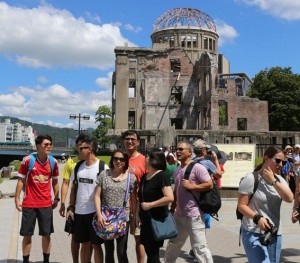 To comfort the souls of those who lost their lives to the atomic bombing 72 years ago, the City of Hiroshima held the annual Peace Memorial Ceremony in the Peace Memorial Park on August 6. It was the first observance of the A-bomb anniversary since a historic treaty to outlaw nuclear weapons was adopted at the United Nations last month.

Among those in attendance were A-bomb survivors, Prime Minister Shinzo Abe, and government officials and representatives from 80 countries.

To start the ceremony, the register of the A-bomb victims, to which the names of those who died during the past year have been added, was placed in the stone chest beneath the Cenotaph for the A-bomb Victims.

At 8:15 a.m., the time the atomic bomb exploded above the city, the Peace Bell was tolled by two relatives of the A-bomb victims, and all in attendance offered a silent prayer.

Hiroshima Mayor Kazumi Matsui then read out the Peace Declaration. He said, “As long as nuclear weapons exist, the hell” created by the atomic bombing “is not a thing of the past,” and “their horror could leap into our present at any moment.” He said this is why people should listen to the voices of the hibakusha, the A-bomb survivors. “This appeal to conscience and this demand that policymakers respond conscientiously are deeply rooted in the hibakusha experience. Let’s all make their appeal and demand our own, spread them throughout the world,” he stated.

Referring to the Treaty on the Prohibition of Nuclear Weapons, Mr. Matsui called on “the governments of all countries” to “strive to advance further toward a nuclear-weapon-free world.” He then pressed the Japanese government to do “everything in its power to bridge the gap between the nuclear-weapon and non-nuclear-weapon states, thereby facilitating the ratification” of the treaty. After the mayor spoke, the “Commitment to Peace” was read out by two local elementary school students.

In the closing days of World War II, a uranium-type bomb was dropped on Hiroshima. The temperature of the ground at the hypocenter reached 4,000 degrees Celsius, and buildings within two kilometers of the hypocenter were burned to ash. The tremendous heat rays and blast, as well as the massive amount of radiation released by the bomb, killed scores of people. Three days later, a plutonium-type bomb was dropped on Nagasaki.

It is estimated that, by the end of 1945, the death toll stood at 140,000 in Hiroshima and 70,000 in Nagasaki. In addition, many more have died of leukemia and other bomb-related causes since 1946. Many survivors have suffered from cancer and various types of diseases, due to the late effects of A-bomb radiation.

Those recognized as A-bomb survivors by Japan’s Ministry of Health, Labour and Welfare include people who entered central Hiroshima within two weeks of the atomic bombing and those who were involved in rescue work. As of the end of March, the number of A-bomb survivors still alive today is 164,621 and their average age is 81.41.

Motivated by the conviction that there must be no more victims of nuclear weapons, A-bomb survivors have been appealing for the abolition of nuclear arms for decades. In May of last year, Barack Obama became the first sitting president of the United States to visit Hiroshima and he expressed a renewed commitment to advance the goal of a world without nuclear weapons. This year, the A-bomb survivors are thrilled that a treaty which outlaws nuclear arms was adopted at the United Nations with the support of 122 nations.

At the same time, nearly 15,000 nuclear weapons still exist in the world, and 90 percent are held by the United States and Russia. Very little progress has been made toward nuclear disarmament and the nuclear weapon states have indicated that they will not ratify the nuclear weapons ban treaty. This stance is also shared by Japan and other countries that continue to cling to a security policy that relies on the nuclear arsenals of their allies. In his Peace Declaration, Mr. Matsui called on the Japanese government to serve as a bridge between the nuclear and non-nuclear nations. The A-bomb survivors, though, are urging Japan to become a leading advocate of the treaty and ratify it.