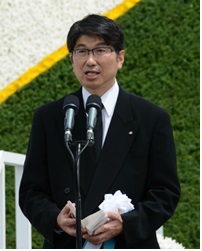 These words express the heartfelt wish of the hibakusha that in the future nobody in the world ever again has to experience the disastrous damage caused by nuclear weapons. This summer, the wish has moved many nations across the globe and resulted in the creation of a certain treaty.

The Treaty on the Prohibition of Nuclear Weapons, which of course prohibits the use of nuclear weapons, and furthermore their possession or deployment, was adopted this July by 122 nations, a figure representing more than 60% of the United Nations’ member states. This was a moment when all the efforts of the hibakusha over the years finally took shape.

I would like to call this treaty, which mentions the suffering and struggles of the hibakusha, “The Hiroshima‐Nagasaki Treaty.” I would also like to express our profoundest gratitude to all of the nations that promote this treaty, the United Nations, NGOs and others who have acted with such vigorous determination and courage to rid the world of weapons that go against the spirit of humanity.

However, this is not our final goal. There are still around 15,000 nuclear weapons in the world. The international situation surrounding nuclear weapons is becoming increasingly tense. A strong sense of anxiety is spreading across the globe that in the not too distant future these weapons could actually be used again. Moreover, the nuclear-armed states are opposed to this treaty and there is no end in sight to the road towards “a world free of nuclear weapons,” the realization of which is our objective. The human race is now faced with the question of how this long awaited treaty can be utilized to make further progress.

I hereby make the following appeal to the nuclear-armed states and the nations under their nuclear umbrella. The nuclear threat will not end as long as nations continue to claim that nuclear weapons are essential for their national security. Please reconsider your policies of seeking to protect your nations through nuclear weapons. The Nuclear Non-Proliferation Treaty (NPT) obligates all its member states to achieve nuclear disarmament. Please fulfill this obligation. The whole world awaits your courageous decisions.

To the Japanese government I have this appeal to make. Despite the fact that the Japanese government has clearly stated that it will exercise leadership in aiming for a world free of nuclear weapons, and play a role as a bridge between the nuclear-armed states and the non-nuclear-armed states, its stance of not even participating in the diplomatic negotiations for the Nuclear Prohibition Treaty is quite incomprehensible to those of us living in the cities that suffered atomic bombings. As the only country in the world to have suffered wartime atomic bombings, I urge the Japanese government to reconsider the policy of relying on the nuclear umbrella and join the Nuclear Prohibition Treaty at the earliest possible opportunity. International society is awaiting the participation of Japan.

Furthermore, I ask the Japanese government to affirm to the world its commitment to the pacifist ethos of the Constitution of Japan, which firmly renounces war, and its strict observance of the Three NonNuclear Principles. As a specific policy representing a step forward towards a world free of nuclear weapons, it should act now by examining the concept of a “Northeast Asia Nuclear-Weapons-Free Zone.” This, we will certainly never forget: the fact that at 11:02 a.m. on August 9, 1945, an atomic bomb exploded in the air right above the hill where we are now assembled, killing and injuring 150,000 people.

On that day, the furious blast and heat rays reduced the city of Nagasaki to a charred expanse of land.

People whose skin hung down in strips staggered around the ruined city looking for their families. A dumbfounded mother stood beside her child who had been burnt black. Every corner of the city was like a landscape from hell. Unable to obtain adequate medical treatment many of these people fell dead, one by one. Even now, 72 years after that day, the damage resulting from radiation exposure continues to ravage the bodies of the surviving hibakusha. Not only did the atomic bomb indiscriminately steal the lives of beloved family members and friends who had always been at each other’s side, it then went on to hideously devastate the subsequent lives of those who survived.

Leaders of all the nations of the world: please come and visit the atomic-bombed cities of Hiroshima and Nagasaki. I want you to see what happened down here on the ground beneath the mushroom cloud, not from a perspective high above it; I want you all to see with your own eyes, hear with your own ears, and feel with your own hearts just how cruelly the atomic bomb trampled on the dignity of human beings. I want you to imagine how you would feel if your own family had been in Nagasaki on that day.

When people have experienced something painful and distressing they tend to lock up that memory in their hearts and are reluctant to talk about it. This is because talking about it entails being reminded of it. The fact that the hibakusha have continued to talk about their experiences while enduring physical and mental scars represents an act by individual members of humankind to protect our future by determining, to make the upmost efforts to spread their message.

I make this call to all the people of the world. The most frightening things are disinterest and the process of forgetting. Let us all pass on the baton of peace that we have received from the hibakusha and those who have experienced war, so it is seamlessly carried on into the future.

The 9th General Conference of Mayors for Peace is currently being held here in Nagasaki. Many representatives of towns and cities that have painful memories of war and civil strife participate in this network of 7,400 municipalities. In solidarity with our friends in Mayors for Peace, we will send out from Nagasaki to the world the message that with united efforts and unwavering commitment, even calls of peace from small cities can provide a strong impetus for global progress, just as the hibakusha have shown us.

“Nagasaki must be the last place to suffer an atomic bombing.” These are the words hibakusha have continuously repeated until their voices have become hoarse. We will prove that their words are a common wish and ambition of all mankind.

The average age of the hibakusha now exceeds 81 years. The “era in which the hibakusha are still with us” is drawing to an end. I strongly request that the Japanese government improves the assistance given to hibakusha, and provides relief to all those who experienced the atomic bombing.

Six years have elapsed since the Fukushima Nuclear Power Plant Accident. As a city that has experienced the threat of radiation, we stand with the victims in Fukushima Prefecture and offer them our support.

I hereby pay tribute to the memory of all those who lost their lives to the atomic bombing, and declare that we, the citizens of Nagasaki City, will join hands with all the people around the world who pray for a world free of nuclear weapons, and continue to tirelessly work towards the realization of the abolition of nuclear weapons and everlasting world peace.