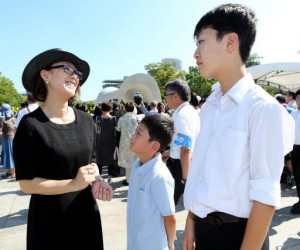 On August 6, the Peace Memorial Park and its surrounding area in Naka Ward, Hiroshima, were packed with people taking part in the 72nd anniversary of the atomic bombing of this city. The participants spent the day mourning the A-bomb victims and praying for peace. Under the scorching mid-summer sun, reminiscent of the day the bomb was dropped 72 years ago, family members of the A-bomb victims attended the Peace Memorial Ceremony with somber thoughts. And in memorial services held at various venues around the country, participants pledged to pass down their A-bomb experiences to future generations.

“I would like to visit Hiroshima with my grandchildren.” This had been the wish of the late mother of Tomoji Natsui, 44, a resident of Akita City and the representative for families of Akita Prefecture’s A-bomb victims. Ms. Natsui attended this year’s ceremony with her oldest son Keiju, 15, a third-year student in junior high school, and her second son, Yamato, 9, a fourth-grader in elementary school, finally fulfilling her mother’s wish and ensuring that her thoughts about peace were handed down to her grandchildren.

Ms. Natsui’s mother, Satoe Sato, was four years old and in Kusunoki-cho (now part of Nishi Ward) with her family when the atomic bomb exploded above Hiroshima. At the time, they were on their way to a place of refuge. In 1962, she moved to Akita City and began sharing her account of the atomic bombing at local schools. In April 2012, she died of bowel cancer at the age of 70.

After her death, Satoe’s eldest daughter, Tomoji, was looking at newspaper clippings collected by Satoe when her eye was caught by an article with a photo. The article was about A-bomb survivors who talked about their A-bomb experiences, and on the clipping, Satoe had written a memo saying that she would like to visit Hiroshima with her grandchildren. When Tomoji received a request to attend the Peace Memorial Ceremony as this year’s representative of the families of Akita Prefecture’s A-bomb victims, she agreed and decided to take her two sons with her.

It was the first visit to Hiroshima for Tomoji’s sons. They read the newspaper article that their grandmother had left behind, and visited the Peace Memorial Museum on August 5. Keiju said, “My grandmother would often tell me that no one should ever use another atomic bomb. I can truly understand the real importance of peace as a result of being here in Hiroshima.”

After the Peace Memorial Ceremony, Tomoji looked over gently at her two sons as they stood at the Cenotaph for the A-bomb Victims. She said, “What’s most important is feeling all this first-hand, with their own senses.” From the solemn expressions on their faces, she realized that she was able to convey this message of peace to her sons.