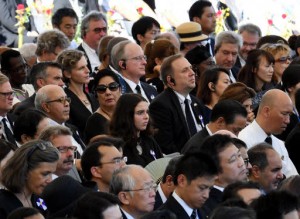 The annual Peace Memorial Ceremony, with representatives from 80 countries and the European Union (EU) in attendance, was held in Peace Memorial Park in Naka Ward, Hiroshima on August 6. Those taking part reflected on the horrific destruction wrought by the atomic bomb 72 years ago. In his Peace Declaration, Hiroshima Mayor Kazumi Matsui called on the nations of the world to work toward ratifying the Treaty on the Prohibition of Nuclear Weapons, but opinions on this treaty remain divided among the representatives who came to the A-bombed city.

Ambassador Hector Dominguez, representative for the Dominican Republic, which voted for the nuclear weapons ban treaty, said that the ceremony was an important opportunity to feel the A-bomb survivors’ deep grief and that the establishment of the treaty would be a huge step toward nuclear abolition.

Herbert Pichler, the Austrian Deputy Chief of Mission, said that the nuclear weapons ban treaty reflects the sufferings of the A-bomb survivors. He stressed that, while it was regrettable that the nuclear weapon states did not join the negotiations, he would continue promoting dialogue to obtain support for the treaty from more countries.

On the other hand, British Ambassador Paul Madden reiterated his nation’s rationale for not taking part in the treaty talks, citing the need for the NPT regime. Danish Ambassador Freddy Svane, too, said that denuclearizing the world would be difficult in societies where people depend on the nuclear umbrella and nuclear energy. Denmark is a member state of the North Atlantic Treaty Organization (NATO), whose members rely on the U.S. nuclear deterrent.