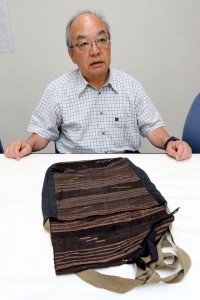 Last month, Toshiki Fujimori, 73, the assistant secretary general of Nihon Hidankyo (Japan Confederation of Atomic and Hydrogen Bomb Sufferers Organizations) and a resident of Chino, Nagano Prefecture, watched the very moment that the Treaty on the Prohibition of Nuclear Weapons was adopted at United Nations headquarters in New York. His sister, Toshiko, who was then 13 years old and a first-year student at Hiroshima Municipal Girls’ High School (now Funairi High School) was killed by the atomic bomb when Hiroshima was attacked. On August 5, Mr. Fujimori went to the Peace Memorial Museum in Naka Ward and, before a display of a bag that once belonged to his sister, he told her that, although it took 72 years, a treaty to ban all nuclear weapons had finally been created. He now believes this treaty will be the first step toward the complete abolition of all nuclear weapons and vows to help advance that goal.

“I was a child when my mother showed me this bag. It was August 6 and she was crying. If there hadn’t been a war, or an atomic bomb, my sister would have put her textbooks and notebooks into this bag and continued going to school. The atomic bomb was so cruel,” Mr. Fujimori said. He looked at Toshiko’s brown cloth bag again and choked back tears. His family donated the bag to the museum in 2011. It was the first time in five years that Mr. Fujimori had seen it, since it was first displayed at an Exhibition of Newly-donated Items in 2012.

On August 6, 1945, 541 first- and second-year students from Hiroshima Municipal Girls’ High School were mobilized to help tear down houses in the southern part of what is now the Hiroshima Peace Memorial Park in Naka Ward, and all of them perished in the atomic bombing. Toshiko’s remains were never found. But her mother, Kasumi, came across Toshiko’s bag beneath the fallen mud wall of a temple, near where the girl had been mobilized to work. Kasumi then cherished the bag until her death in 2002 at the age of 98.

Mr. Fujimori, who was only 16 months old at the time of the attack, was 2.3 kilometers from the hypocenter and suffered serious injuries. On the first day of the U.N. negotiations to discuss the nuclear weapons ban treaty, this past March, he delivered an address on behalf of the A-bomb survivors. In his address, he referred to the many girls from Hiroshima Municipal Girls’ High School who died that day and stressed the inhumane nature of nuclear weapons. During his speech, he recalled his sister Toshiko and said that he has only seen a likeness of her in a painted portrait because all their family photos were destroyed in a fire that burnt down their home, also caused by the atomic bomb. He returned to U.N. headquarters on July 7 and watched the moment when the treaty was finally adopted. He was overcome with emotion.

To coincide with the date of the Hiroshima bombing, and with a strong desire to report on the conclusion of the treaty to the A-bomb victims, Mr. Fujimori arrived in Hiroshima on August 2. At a meeting held on this day in Naka Ward of A-bomb survivors who were still in their mother’s womb when the atomic bombing occurred, he asked the participants to sign the Hibakusha Appeal, a petition to support the abolition of nuclear weapons.

Mr. Fujimori tells himself that he can’t stop now. Though the nuclear weapons ban treaty has been established, the nine nuclear powers, as well as Japan and other nations under the nuclear umbrella, refused to take part in the treaty talks and have indicated that they will not join the treaty. “I would like to make August 6 a day when people vow to work harder for the abolition of nuclear weapons,” he said. On that day, Mr. Fujimori plans to attend a memorial ceremony in front of the monument for the victims from Hiroshima Municipal Girls’ High School, inscribed with the names of 666 students, including Toshiko, and 10 teachers.