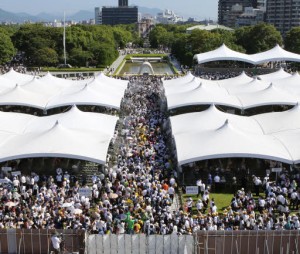 On August 6, 72 years after the first use of a nuclear weapon in warfare, when the United States dropped an atomic bomb on Hiroshima, the City of Hiroshima held the annual Peace Memorial Ceremony in the Peace Memorial Park in Naka Ward. In his Peace Declaration, Hiroshima Mayor Kazumi Matsui said, “I call especially on the Japanese government to manifest the pacifism in our constitution by doing everything in its power to bridge the gap between the nuclear-weapon and non-nuclear-weapon states, thereby facilitating the ratification of the Treaty on the Prohibition of Nuclear Weapons,” an agreement that was adopted at the United Nations last month. However, Prime Minister Shinzo Abe stated clearly, for the first time, that “Japan would neither sign nor ratify the treaty” at a news conference that took place after the ceremony. The appeal of the A-bombed city has fallen on deaf ears.

It was the first observance of the A-bomb anniversary since the historic treaty to ban nuclear weapons was adopted. At the beginning of the Peace Declaration, Mr. Matsui described the catastrophic consequences of the atomic bomb and said, “As long as nuclear weapons exist and policymakers threaten their use, their horror could leap into our present at any moment,” and “Possessing nuclear weapons means nothing more than spending enormous sums of money to endanger all humanity.”

Mr. Matsui judged the first international treaty to completely outlaw the use or possession of nuclear arms, which was adopted with the support of 122 countries, all of them non-nuclear nations, as an unequivocal display of determination to advance the abolition of nuclear weapons. He called on the leaders of all countries to make further efforts for a nuclear-weapon-free world. The mayor urged the Japanese government, which relies on the U.S. nuclear umbrella for the nation’s security and opposes the treaty, to demonstrate pacifism by referring to the Preamble of the Japanese Constitution. He went on to make an indirect request that the government of the A-bombed nation join the nuclear weapons ban treaty.

Prime Minister Abe said in his address that he will abide by the three non-nuclear principles, but he made no mention of the treaty. Later, Mr. Abe held a news conference at a hotel in Naka Ward and stressed that, given the fact that the nuclear powers do not support the treaty due to security concerns, “The nuclear weapons ban treaty would only widen the divide between the nuclear and non-nuclear nations, impeding the realization of a nuclear-weapon-free world. This is not in line with our approach.” Mr. Abe also denied the need to legislate the three non-nuclear principles.

Although the venue for the Peace Memorial Ceremony was smaller than usual because of earthquake reinforcement work now in process, about 50,000 people attended the ceremony, which began at 8 a.m. Among those in attendance were Foreign Minister Taro Kono; Health, Labor and Welfare Minister Katsunobu Kato; and Izumi Nakamitsu, the U.N. Under-Secretary-General and High Representative for Disarmament Affairs. Ms. Nakamitsu attended the ceremony for the first time since assuming her current post. Representatives from 80 nations, including Russia, the United States, and the European Union, attended the ceremony. This was the third highest figure ever. On the other hand, representatives from the bereaved families, by prefecture, was 36, an all-time low.

All in attendance offered a minute of silent prayer at 8:15 a.m., the time the atomic bomb exploded above the city, as the Peace Bell tolled. The bell was sounded by two representatives, from the bereaved families and from children. The Commitment to Peace was read out by two sixth graders who said in unison that we must “communicate tenaciously, never giving up” to convey the importance of mutual understanding and of each individual life. The register of the names of the dead was placed in the stone chest under the Cenotaph for the A-bomb Victims. The new volumes include the names of 5,530 people who died or were confirmed dead over the past year. The register, which contains the names of 308,725 A-bomb victims, has now grown to 113 volumes.

Up until last year, students who attend public elementary schools and junior high schools in the city of Hiroshima went to school on August 6 for the purpose of peace education. But school was not held on August 6 this year because teachers are restricted from working on that day due to an ordinance involving teachers and school staff.

In addition, the Japanese government informed local governments of the relocation schedule of carrier aircraft to the U.S. Marine Corps Air Station Iwakuni, in the nearby city of Iwakuni, which they said would start on or around August 6. This notice generated anger from the A-bombed city. The anniversary of the Hiroshima bombing turned out to be an unusual day.

Summary of the Peace Declaration

--The atomic bomb brought hideous death to many innocent people under the mushroom cloud, and left deep physical and emotional scars to those who barely endured the attack. The survivors also suffered from social discrimination and prejudice. The horror of the atomic bomb could happen again at any moment as long as nuclear weapons exist and policymakers threaten their use.

--The appeal to conscience and the demand that policymakers act in good faith are deeply rooted in the hibakusha experience. It is hoped that youthful visitors will expand the circle of friendship as ambassadors for nuclear abolition.

--Any use of nuclear weapons must never be permitted. Possessing them means nothing more than spending enormous sums of money to endanger all of humanity.

--The Treaty on the Prohibition of Nuclear Weapons was adopted by 122 U.N. member states, demonstrating their unequivocal determination to achieve nuclear abolition. The governments of all countries must now strive to advance further toward a nuclear-weapon-free world.

--The Japanese government is called upon to manifest the pacifism stated in the Japanese Constitution, do everything in its power to bridge the gap between the nuclear and non-nuclear nations, and facilitate the ratification of the nuclear weapons ban treaty.