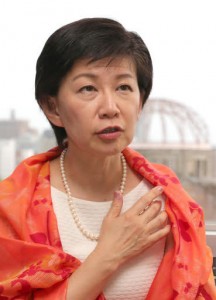 On August 6, after attending the Peace Memorial Ceremony, Izumi Nakamitsu, the U.N. Under-Secretary-General and High Representative for Disarmament Affairs, sat down for an interview with the Chugoku Shimbun. With regard to the nuclear weapons ban treaty that was adopted at the United Nations in July, she expressed appreciation for the role that the A-bombed cities played in this outcome by saying, “The voices of the hibakusha had significant influence.” At the same time, she voiced concerns over the divide between the proponents and opponents of the treaty. Below are excerpts from this interview.

What are your impressions of the Treaty on the Prohibition of Nuclear Weapons?
Holding a humanitarian viewpoint, some member states and non-governmental organizations (NGOs) took the initiative in an effort to comprehensively outlaw all activities related to nuclear weapons. Among them, the strong voices of the hibakusha had a significant and positive influence in bringing the negotiations to a successful conclusion. As a preliminary step toward the abolition of nuclear weapons, codifying the comprehensive banning of nuclear weapons for the first time was of immense importance. However, there are very strong objections from the opponents of the treaty, and for this reason, the dialogue between the opponents and proponents has been disrupted. At the moment, the U.N. secretary general is urging all nations involved to resume dialogue and find common ground. The Austrian government has offered to be the host of the first meeting of State Parties. It is very likely, however, that the meeting will initially encounter a number of difficult challenges.

While it is hoped that the Japanese government will serve as a bridge between the nuclear nations and non-nuclear nations, some people in Hiroshima and Nagasaki suggest that Japan should first ratify the treaty and then urge other countries to ratify the treaty.
The nuclear weapon states have a special responsibility to reduce their nuclear arsenals and, as a consequence, international pressure against them has grown. However, simply urging the nuclear powers to ratify the treaty is not enough. If Japan is going to serve as a bridge between the two sides, one of the ways it can accomplish this is by eliciting concrete steps for arms reduction from the nuclear weapon states at the 2020 Review Conference of the Treaty on the Non-proliferation of Nuclear Weapons (NPT). In the wake of the 2015 review conference failure, the notion that there needs to be a nuclear disarmament framework to complement the NPT was produced, and this subsequently created strong momentum for a nuclear weapons ban treaty. So it would seem that concrete steps for arms reduction are required for the purpose of defending the NPT regime.

The signing of the nuclear weapons ban treaty by representatives from members states will begin on September 20. Is there a likelihood that A-bomb survivors will be invited to the signature ceremony?
The other day, ambassadors to the United Nations from several countries that took a pivotal role in negotiating the treaty visited the secretary general and requested that he invite some members of civil society to the ceremony. If that happens, A-bomb survivors will also be invited to take part in the signature ceremony.

At the Peace Memorial Ceremony, you read out a message from U.N. Secretary-General Antonio Guterres. Is there a possibility that he will visit Hiroshima?
Mr. Guterres is extremely busy right now so I’m not sure whether or not he will be able to visit. But I’ve already talked with him about the importance of visiting Hiroshima and Nagasaki and my feeling is that he has the intention of visiting the A-bombed cities.