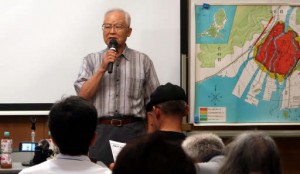 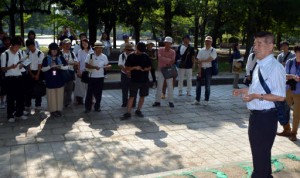 On July 30, two people who once lived in the former Nakajima district, prior to the atomic bombing, shared their memories of life at that time at an event held in the Peace Memorial Park in Naka Ward, Hiroshima. The former Nakajima district was once part of the area where the park now stands. Through the excavation work that the City of Hiroshima pursued until this past March, the foundation of buildings and household items, which were part of the old district, were unearthed beneath the main building of the Peace Memorial Museum. As the two speakers reflected on their memories of the lives they once knew, with family members and neighbors, they conveyed the tragedy of the atomic bombing, which annihilated the Nakajima district in an instant.

“I used to play at Seiganji Temple, which was near my home. There were dragonflies and turtles in the temple’s pond. A public bath was located next to my house. I only have pleasant memories from around that time,” said Hiromitsu Yamasako, 82, a resident of Nishi Ward, as he looked back nostalgically on his days in the district. He was speaking in front of about 90 people in a room at the Hiroshima National Peace Memorial Hall for the Atomic Bomb Victims. Mr. Yamasako’s family once ran a milk delivery business in the former Zaimoku-cho neighborhood, where the Peace Memorial Museum’s main building now stands.

Through the excavation work, melted milk bottles and the foundation of a public bath were found near the area where Mr. Yamasako’s home had stood. When the excavated area was opened to the public last October, he came to look at the site, too. Before the A-bomb attack, Mr. Yamasako, who was then a fourth-grader at Nakajima National School (now Nakajima Elementary School), was evacuated to the northern part of Hiroshima Prefecture with other children. And all the members of his family managed to survive the bombing because none of them were at home at the time of the attack. However, he told the audience that he couldn’t help but cry when he stood at the site of the excavation work and thought about how his neighbors perished that morning. He stressed that an enjoyable life can only be lived in a world at peace.

Tokuzo Hamai, 83, a resident of Hatsukaichi who grew up at a barber shop in the former Nakajima Honmachi, an area within the district north of Mr. Yamasako’s home, also shared his account at the event. He explained that he went to Mutoku Kindergarten, which stood where the excavation work was carried out, and that the bombing claimed the lives of his parents, his elder sister, and his elder brother. He told the audience that the memories of the former Nakajima district and the damage wrought by the atomic bomb must not be forgotten.

After hearing the stories told by Mr. Yamasako and Mr. Hamai, the participants then walked around the areas where the monument to remember the former Zaimoku-cho now stands and where the barber shop mentioned by Mr. Hamai had stood. Three students from Fukuyama Industrial High School, located in the city of Fukuyama, are working on a virtual reality video to reproduce the hypocenter area in the aftermath of the atomic bombing and they asked Mr. Hamai about the materials of the buildings at the time and other questions. Tsubasa Hirata, 18, a third-year student from the school, said, “I could feel, first-hand, the significance of lives that were lost in the atomic bombing. I hope our work can help hand down their memories to the next generation.”

The event was organized by a citizens’ group called the Hiroshima Field Work Execution Committee.