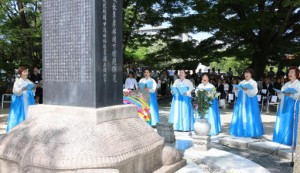 On August 5, a memorial ceremony for Korean A-bomb victims was held in front of the Monument in Memory of the Korean Victims of the A-bomb in the Hiroshima Peace Memorial Park in Naka Ward. The ceremony was attended by about 330 people, including family members of the victims.

The leader of the Hiroshima Headquarters of the Korean Residents Union in Japan (MINDAN), the organizer of the ceremony, dedicated the register containing the names of 2,734 Korean victims, including an additional 11 victims whose deaths were confirmed during the past year, to the monument. Those present then offered silent prayers and sang a memorial song to comfort the souls of the victims.

In his address, the leader of the central headquarters of MINDAN condemned North Korea for its nuclear development program. Referring to the treaty on the prohibition of nuclear weapons adopted at the United Nations last month, he pledged that his organization will do all it can to make sure that both South Korea and Japan join the treaty. Park Namjoo, 84, an A-bomb survivor and resident of Nishi Ward, attended the ceremony and said that she previously felt a sense of guilt for having survived the atomic bomb, but now feels glad that she could live in a time of peace after the war ended. She added that she would like to convey to younger generations that this time of peace was made possible because of the ultimate price paid by the A-bomb victims.

On this day, a memorial service was also held at a hotel in Minami Ward by the Consulate General of the Republic of Korea in Hiroshima.