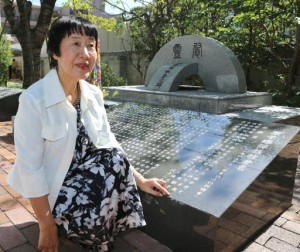 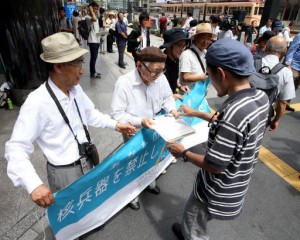 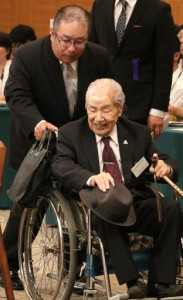 Hiroshima commemorated the anniversary of the atomic bombing for the first time since the Treaty on the Prohibition of Nuclear Weapons was adopted at the United Nations in July. In its preamble, the treaty includes wording which describes the suffering of the hibakusha (A-bomb survivors) and their efforts to abolish nuclear arms. The nuclear powers and nations like Japan, which rely on the nuclear umbrella for their security, remain opposed to the treaty, resulting in a deep divide between these countries and the countries that have promoted the agreement. The survivors of Hiroshima, who have appealed for the treaty both in and out of Japan, savored the significance of its adoption and now hope that a world without nuclear weapons can be realized as soon as possible.

Toshiko Tanaka, 78, an A-bomb survivor and resident of Higashi Ward, put her hands together in prayer in front of the monument for the A-bomb victims from Hiroshima Jogakuin Junior and Senior High School, located in Naka Ward. Ms. Tanaka said, “If I put myself in the shoes of the victims, whose lives have lost almost all their traces and are unable to speak from heaven, I believe the only thing they would want is for this treaty to be used to eliminate all nuclear weapons from the world.”

The names of 350 victims, who were students and teachers at the school at the time of the bombing, are inscribed on the monument. One of these names is Hikoshichi Tanaka, her husband’s maternal uncle, who was then a 59-year-old English teacher. On that day, Hikoichi, who was in the school building, and the other three members of his family, including his wife and daughter, were killed in the atomic bombing. Ms. Tanaka’s husband thus changed his surname to Tanaka so he could take over his mother’s family name. She has continued to visit the monument on her husband’s behalf, since his death in 2005.

Ms. Tanaka also experienced the atomic bombing. She was six years old back then and at a location about 2.3 kilometers from the hypocenter. Over the years she has shared her A-bomb experience with others in Japan and abroad. This past June, she visited United Nations headquarters in New York, where the negotiations to establish the treaty were being held, on a voyage organized by Peace Boat, a Tokyo-based NGO. At an associated event, she appealed for the treaty to be realized. “As A-bomb survivors who are still alive, we have to speak out.” Backed by the silent voices of the victims, she continues to call on the nations of the world to ratify and enact the treaty.

Meanwhile, the Japanese government has turned its back on the treaty. Prime Minister Shinzo Abe made no mention of it in the speech he gave at the Peace Memorial Ceremony on August 6. After the ceremony, Mr. Abe met with representatives of the A-bomb survivors at a hotel in Naka Ward to hear their requests. “The treaty is an issue involving all human beings,” said Sunao Tsugoi, 92, chair of the Hiroshima Prefectural Confederation of A-bomb Sufferers Organizations (Hiroshima Prefectural Hidankyo), urging Mr. Abe to support the treaty.

Mr. Tsuboi arrived at the event in a wheelchair. Afterward, he said with frustration, “I came here thinking that this was my last chance to take part. I still want to witness the moment that Japan joins the treaty, but that may not be possible.”

Under a blazing hot sun, 25 people, including A-bomb survivors from seven groups of hibakusha in Hiroshima, stood on a busy shopping street in Naka Ward and called for passersby to provide their signatures of support. “Let’s make the treaty stronger with the power of everyone’s signature,” they said. Their efforts were part of the signature drive called the “Hibakusha Appeal for a Nuclear Ban Treaty,” which urges all nations to sign the treaty.

Mikiso Iwasa, 88, an advisor to the Japan Confederation of A- and H-Bomb Sufferers Organizations (Nihon Hidankyo) and a resident of Funabashi, Chiba Prefecture, stood on the street with the other campaigners. Mr. Iwasa, an A-bomb survivor who lost his mother and younger sister in the bombing, stepped down as the chairperson of Nihon Hidankyo this past June due to his advancing age. He wiped the perspiration from his face and said firmly, “The deaths of the hibakusha will never have been in vain.”