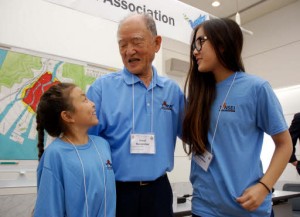 Junji Sarashina, 88, a second-generation Japanese-American and a resident of California, shared his A-bomb experience with young people from Japan and the United States on July 31. He sent a strong message to his young audience that nuclear weapons must not be used and must be abolished from the world. In July, Mr. Sarashina was appointed president of the American Society of Hiroshima-Nagasaki A-bomb Survivors, which is composed of A-bomb survivors living in the United States. It was the first time that three generations of his family returned to Hiroshima together.

Mr. Sarashina’s father was a Buddhist monk who emigrated from what is now the city of Akitakata to the island of Maui in Hawaii. In 1936, he came to Hiroshima, with his mother and siblings, to be educated in Japan. Mr. Sarashina was a third-year student at First Hiroshima Prefectural Junior High School (now Kokutaiji High School) and commuted there from a boarding house in Midori-machi (now in Minami Ward). He experienced the atomic bombing while in Minamikanon-machi (now in Nishi Ward), where he was mobilized for the war effort. This location was about 4 kilometers from the hypocenter.

The trip was made possible thanks to Emily, 14, and Stephanie, 10, Mr. Sarashina’s granddaughters who belong to a basketball team consisting of fourth-generation Japanese-Americans. The team visited the cities of Matsue and Hiroshima for friendly matches and he accompanied them. Before he made up his mind to go, he was worried about traveling a long distance on weakening legs, but he decided to come with his granddaughters when he recognized that this would be the last chance to walk around the Hiroshima Peace Memorial Park with them. His wife Kiyoko, 86, who is also an A-bomb survivor, traveled with him. During their time in Japan, the family also plans to visit their ancestors’ graves.

In all, 120 people listened to Mr. Sarashina’s A-bomb account at the Hiroshima Peace Memorial Museum, including the basketball players, their family members, and junior high and high school students from Hiroshima. The event was organized by the “Honkawa Omotenashi Tai,” a group that offers hospitality to people who visit the Honkawa Elementary School Peace Museum. They also hosted the basketball team.

When the atomic bomb exploded in Hiroshima, Mr. Sarashina tried to return to his school, but fire blocked his way and he was unable to arrive until the next day. He found a younger student in the school swimming pool, but when he went to pull him out by taking hold of his arm, the student’s skin peeled away. With thousands of corpses all around him, Mr. Sarashina said he even lost the feeling of fear. At his school, there were 369 students who became victims of the atomic bomb. Most of them were first-year students who were mobilized to help demolish buildings to create fire lanes. The fact that he could only give water to the dying students still weighs on his mind.

The Sarashina family was at the mercy of war. Mr. Sarashina’s father was sent to an internment camp on the U.S. mainland. Mr. Sarashina himself was mobilized for the Korean War as an American soldier. In the speech he gave in Hiroshima, he stressed that his desire for peace has sprung from his personal experience as an A-bomb survivor and a Japanese-American.

Mr. Sarashina said that his hope lies with younger generations because his experience can move their hearts. Emily sat in the front row as she listened to her grandfather’s story. She said that her grandfather’s experience was something that people could never learn from a textbook and she intends to convey his message to others. Mr. Sarashina’s desire for peace will be left in the hands of the generations that follow.