The Key to a World without Nuclear Weapons: The Power of Younger Generations, Part 1 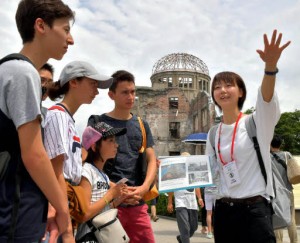 On July 17, the last day of a three-day weekend in Japan, Mizuki Yamauchi, 18, a freshman at Yasuda Women’s University, was standing in front of the A-bomb Dome, a UNESCO World Heritage site. She was holding a sign, in Japanese and English, with the offer to guide visitors around the A-bomb monuments. Speaking slowly to some visitors from France, who listened attentively to her words, Ms. Yamauchi explained that the Peace Memorial Park area had once been a bustling district where many people lived.

Ms. Yamauchi began serving as a volunteer guide in the Peace Memorial Park when she became a college student this past spring. She joined a group led by Kosei Mito, 71, whose mother was pregnant with him when she was exposed to the atomic bomb. Ms. Yamauchi’s name tag says that she is a trainee. Volunteering mainly on weekends between part-time jobs, she guides people around the A-bomb Dome, a “silent witness” to the atomic bombing, as well as other nearby sites like the Memorial Tower to the Mobilized Students and Shima Hospital, above which the atomic bomb exploded. Speaking in English, she relates the history of these places to international visitors.

She explains: “Many innocent children were killed in the atomic bombing when they were mobilized to help tear down houses to create a fire lane” and “The busy area here was annihilated in an instant.” She says she tells tourists what she herself felt was frightening or sad, because she hopes “they will understand the horror of the event and feel that a tragedy like this must never happen again.”

Interest in being a guide grew in high school

Ms. Yamauchi was raised in Hiroshima and took part in peace education lessons in elementary school and junior high school. At the time, though, she didn’t feel a special interest in this topic. To improve her English skills, she participated in an event held by the Hiroshima Youth Center in the summer of her second year in high school. At this event, she had the opportunity to guide visitors in the Peace Memorial Park in English. As a result of this experience, she developed the desire to interact with people from around the world.

Around the same time, Ms. Yamauchi helped record A-bomb survivors’ accounts for a website that conveys the reality of the atomic bombing. The opportunity to meet Takashi Morita, the chairman of the Peace Association of Brazilian A-bomb Survivors, was her first chance to listen directly to a survivor’s account. Learning that Mr. Morita has been campaigning for peace in a foreign country in spite of illness, she decided that she should do what she can so that the experiences of the A-bomb survivors, instead of being lost, will be properly handed down to younger generations.

While in high school, she and some friends made a sign with the offer to guide visitors through the park. She also studied the city’s history, before and after the atomic bombing, and learned how the horrible event had happened right where she stands. The visitors she guided would respond with positive feedback, saying that they appreciated being able to learn new things through her explanations. Encouraged by their words, she decided to go to a university in Hiroshima so she could continue guiding visitors to the city.

Mr. Mito hopes that Ms. Yamauchi will continue to grow as a guide through her experiences. Since the visit to Hiroshima in May 2016 by Barack Obama, who was then U.S. president, the city has attracted greater attention and the number of people visiting the Peace Memorial Park has been on the rise.

Making good use of her experience

The role of Hiroshima guides is becoming increasingly important, though making a living as a guide is difficult. Most of the volunteer guides who belong to about a dozen groups are older than 60, with some elderly A-bomb survivors still serving in this role. Mr. Mito said, “Without an environment where young people continue to stay active in this way, there won’t be enough guides for the amount of visitors.”

Ms. Yamauchi hopes to sustain her efforts as a guide during her college years. After graduating, she would like to be an elementary school teacher. Through peace education, she wants to help children understand the consequences of the atomic bombing and the preciousness of peace. She believes that she can make good use of her experience working as a volunteer guide. Though her grandfather is an A-bomb survivor, she hasn’t consciously thought of herself as a third-generation survivor. But she will visit him in the town of Sera this summer to listen to his experience.