The Key to a World without Nuclear Weapons: The Power of Younger Generations, Part 2 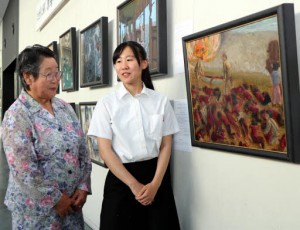 The oil painting is titled “Those who met their end” and it depicts a score of victims lying on the bank of a river, soldiers hauling bodies for cremation, and a small child hanging onto a dead mother. It was based on a scene that Namjoo Park, 84, an A-bomb survivor and resident of Nishi Ward, Hiroshima, witnessed in the aftermath of the atomic bombing and held in memory for the past 72 years. Ms. Park experienced the bombing at a spot in Fukushima-cho (now part of Nishi Ward), which is 1.9 kilometers from the hypocenter.

The painting was created by Yume Sugie, 18, a resident of Naka Ward and a third-year student in the Creative Expression Course at Motomachi High School in Naka Ward, Hiroshima. In this course, students listen to the accounts of A-bomb survivors then spend a year working on paintings which depict these experiences.

Last August, Ms. Sugie met Ms. Park, a South Korean resident of Japan, for the first time. Ms. Sugie listened to the dreadful scene that Ms. Park, who was 12 at the time, witnessed at the side of the river (now the riverbed of the Otagawa River Canal) near her home at around noon on the day of the A-bomb attack. Ms. Sugie was struck by Ms. Park’s strong emotion and her words “War is wrong.”

Ms. Sugie made a rough sketch of the scene and showed it to Ms. Park, who studied it grimly. Criticizing the sketch sternly, Ms. Park said, “It wasn’t anything like this. There were a lot more bodies, so many that there was almost nowhere to step. Their hair and their clothing were in tatters; they weren’t clean like this...”

Ms. Sugie wasn’t sure how to proceed. Looking back, she said, “I could understand what she was saying, but it was hard for me to imagine what it was really like.” She wondered what she should do because she found it hard to draw the bodies that matched Ms. Park’s memory. But then she suddenly remembered how Ms. Park had said that the victims fought desperately to rise, pleading for water. So Ms. Sugie considered the condition of each person in the painting. How did they get to this site? What led them to collapse on the ground in this position? How did they feel as they tried to get back up? In this way, little by little, Ms. Sugie moved closer to the heart of Ms. Park’s experience.

On weekends, Ms. Sugie went to school and painted. She revised her work, again and again, and visited Ms. Park’s home after school to discuss her progress. The finished painting was finally completed the day before the event where the students’ paintings were unveiled to the public, which took place on July 4.

At the unveiling, Ms. Park looked at the painting and nodded. She said, “I wanted this painting to convey the message that something terrible like this will happen if war breaks out again.” This is why she was stern about asking Ms. Sugie to make revisions. “I hope many people see this painting,” she added.

Desire to hand down memories of A-bombing

This art project at Motomachi High School, which was first organized at the request of the Hiroshima Peace Memorial Museum, began in fiscal year 2007. This year marked the 10th round of paintings, with 18 second- and third-year students involved. Over the past decade, 116 paintings have been created, based on the A-bomb accounts of 54 survivors. The works are stored at the museum and used at events where A-bomb survivors share their experiences and on other occasions. The paintings can help communicate the reality of the atomic bombing more vividly.

Kazunuki Hashimoto, 58, a teacher at the school who has been guiding the students in this project for the past 10 years, said, “The paintings become valuable resources. We would like to create as many paintings as possible of the accounts of the survivors.” He went on, “The students are able to take the survivors’ sad experiences to heart, and become aware of the importance of stepping into another person’s shoes.” Some of the students have stayed in contact with the survivors they were paired with after the paintings are completed.

This was the second time that Ms. Sugie was involved in painting an A-bomb experience. She made her first painting during her first and second year at the school. Originally, she decided to take part because she wanted to improve her painting skill. Her feelings grew, however, through her many meetings with Ms. Park, where the Korean survivor gave her advice on creating the painting and sometimes served her homemade Korean food. Ms. Sugie said, “I felt Ms. Park’s desire to hand down her experience of the atomic bombing to the next generation. I was really inspired by this.” While Ms. Sugie hopes to go on to university and study art, she has also become more eager to take part in activities that can help convey a message of peace to the world.

On July 25, the 11th group of students at Motomachi High School began the process of painting memories of the atomic bombing. Another round of this art project has brought more young people to reflect on that tragic event and convey the survivors’ memories on canvas.