The Key to a World without Nuclear Weapons: The Power of Younger Generations, Part 6 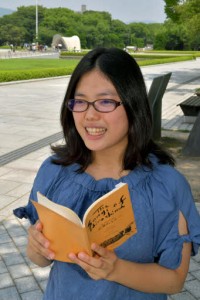 “Only one nuclear weapon can deprive thousands of innocent people of their future. The mistake that happened in my hometown of Hiroshima, Japan must never be made again.”

Kanako Otani, 22, a third-year student at California State University in Chico, California, read out a speech that she had written in English, gesturing to stress her message. Ms. Otani hails from the city of Higashihiroshima and is a member of the speech and debate team at her university, where she majors in communications. She is now preparing for a speech and debate competition that will take place in San Francisco in September. She plans to deliver a speech that includes quotations from A-bomb poems and appeals for the importance of a world without nuclear weapons.

Because the time limit for her speech is 10 minutes, she decided to feature A-bomb poems because they can convey the true consequences of the atomic bombing in concise terms. Focusing on poetry written in the 1950s and 1960s, she picked four poems including “Funno” (“Rage”) by Kishiro Tanaka and “Kore ga ningen nano desu” (“This is a human being”) by Tamiki Hara from a collection of his poems titled Genbaku shokei (Little Landscapes of Hiroshima). These poems depict sad, vivid scenes, such as badly burned A-bomb survivors fleeing desperately for refuge and help, and the landscape of the city center strewn with scores of bodies.

“I want to convey what really happened under the mushroom cloud, from the Japanese perspective,” Ms. Otani said. She seeks to communicate the tragedy that a single bomb brought about, in a single moment of time.

Regret over fear of conflict

One reason she chose the atomic bombing as the topic for her speech is due to some regret she feels over a past experience. When she was in elementary school in Higashihiroshima, August 6 came during summer vacation yet school was held on that day. This gave her a chance to think about the atomic bombing and peace, and she also paid a visit to the Peace Memorial Museum in Naka Ward, Hiroshima. Later, she made use of her skill in English, her favorite subject, by entering a university in the United States. But when she chose a history class, she deliberately avoided taking a class in modern history, which would have included the history of World War II, and she enrolled in a class in ancient history instead. She confessed, “I didn’t know what children in the United States were taught about the atomic bombings in school, so I was afraid of conflict with other students when discussing our views of the A-bomb attacks.”

However, after chatting with American friends, she came to realize that they, too, have some understanding of the inhumane nature of nuclear weapons. She then reconsidered her decision and began to feel that she should speak out, as someone from Hiroshima, about the atomic bombings and peace education. After Donald Trump became U.S. president and vowed to strengthen that nation’s nuclear arsenal, she grew even more concerned. To date, she has taken part in speech competitions a total of 25 times and now feels determined to make upcoming competitions an opportunity to convey her message on the atomic bombings and peace.

In the meantime, she faces the weight of speaking about this heavy topic. At the end of May, she returned to Japan so she could gather materials to draft her speech and learn more about the experience of the atomic bombing. She toured the east building of the Peace Memorial Museum, where the exhibition space was recently renovated, and listened to the A-bomb accounts of five surivivors. She sought to take in how the tearful survivors put their experiences into words, to the degree she could, in order to bring their spirit into her presentation.

Ms. Otani also asked the survivors what they would like to convey to American citizens. They said that nuclear weapons should never be used again and that, in the first place, they hope that conditions in the world will never again degenerate into war. Rather than bitterness toward the United States, they expressed a wish for a peaceful world. Based on these conversations, she then crafted the text for her speech.

On July 7, the Treaty on the Prohibition of Nuclear Weapons was adopted at U.N. headquarters in New York. At first, she wrote in her speech that “All nations should join the treaty,” but then edited this to “All nations should eliminate their nuclear weapons” because she feels this is the greater goal.

Ms. Otani is now wondering if she will be able to make use of her speech beyond the speech competitions, after she graduates from college in May 2018. As a young person from the A-bombed nation, she intends to send a frank antinuclear message to the people of the United States, the nation that dropped the atomic bombs on Hiroshima and Nagasaki and has possessed nuclear weapons for the past 72 years, as well as to the people of other nations which still cling to the idea of nuclear deterrence.