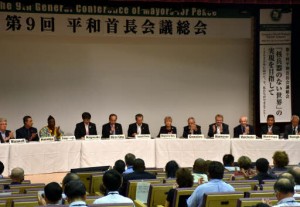 The general assembly of Mayors for Peace opened in the city of Nagasaki on August 8. The Mayors for Peace organization, for which Hiroshima Mayor Kazumi Matsui serves as president, has a membership of more than 7,000 cities at home and abroad and holds its general assembly meetings every four years. On the first day of the meeting, a new action plan was adopted that will be pursued until the year 2020, which the organization has designated as the target year for the abolition of nuclear weapons. In line with the new action plan, the member cities will strengthen their efforts to collect signatures in support of the Treaty on the Prohibition of Nuclear Weapons, established at the United Nations last month, and urge the governments of all nations to take action so that the treaty can be concluded as early as possible. Mayors for Peace will also work on a new measure that involves appointing prominent figures to serve as nuclear abolition campaign ambassadors.

The general assembly has brought together representatives from a record-high 171 cities from 24 nations. A plenary session was held at Nagasaki University where the new action plan presented by the secretariat was adopted.

One of the pillars of the new action plan is the “realization of a world free of nuclear weapons.” The organization’s signature drive, which originally called for starting negotiations for a nuclear weapons ban treaty, has been revised to appeal for the early accession to the treaty. Mayors for Peace will promote its new signature campaign as well as the “Hibakusha Appeal,” another signature drive being pursued by the Japan Confederation of A- and H-Bomb Sufferers Organizations (Nihon Hidankyo). Mayors for Peace will also seek to spread awareness of the inhumane nature of nuclear weapons and the dangers of nuclear accidents, and work with civil society to encourage countries which rely on nuclear deterrence to change this policy. According to the new action plan, the organization will appoint prominent figures from the fields of culture, the arts, and sports to serve as nuclear abolition campaign ambassadors. It will also promote peace education through animation and music.

The other main pillar of the action plan is the “realization of safe and resilient cities.” This pillar was adopted based on the request of member cities in Europe and Africa for the organization to be engaged in activities along with the nuclear abolition campaign. According to the plan, the lead cities of each region will take the initiative in holding meetings that consider such issues as terrorist attacks, refugees, and environmental destruction. For this purpose, it was decided that, if necessary, the annual membership fee would be raised to 6,000 yen from the current amount of 2,000 yen, starting in 2019, so that the additional funds could be allocated to support local activities.

Yasuyoshi Komizo, the secretary-general of Mayors for Peace, expressed support for this new direction by telling the participants that if the organization also addresses the issue of terrorism, which has become a major concern in every region, this will likely help fuel the growth of its membership, and that development could also have a positive effect on strengthening their efforts for advancing the goal of nuclear abolition.

The general assembly has usually been held every four years, alternating between the cities of Hiroshima and Nagasaki. However, it was decided that the next general assembly meeting will be held in Hiroshima in 2020, the target year for the abolition of nuclear weapons, which is one year earlier than the ordinary timing.

The 2017 general assembly is scheduled to run until August 10. On August 8, Izumi Nakamitsu, the U.N. Under Secretary General and High Representative for Disarmament Affairs, delivered a speech at the opening ceremony. At the same time, a video message from Elayne Whyte Gómez, the president of the conference for the nuclear weapons ban treaty, was also screened. In her message, she said that she hopes Mayors for Peace will make a strong call to all nations to sign and ratify the treaty.

As of August 1, Mayors for Peace is composed of 7,417 cities in 162 countries and regions around the world.