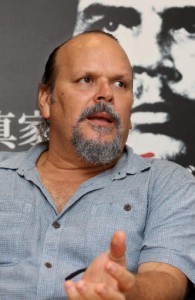 The flamboyant life of Che Guevara (1928-1967), one of the leaders of the Cuban Revolution, still attracts the interest of people around the world. This year marks the 50th anniversary of his death, and an exhibition of his photos is now being held in Tokyo, the first such exhibition to take place in Japan. The photos on display are those that were taken by Guevara himself, and some of the images will also be exhibited in Hiroshima. His eldest son, Camilo Guevara, 55, who first visited Hiroshima earlier this month to attend the ceremony for the anniversary of the atomic bombing, said that he hopes people will appreciate the sensitive side of the “photographer” Che Guevara.

Camilo is now the coordinator of the Centro de Estusios Che Guevara, a museum in Havana dedicated to research involving the Che Guevara. Camilo is visiting Japan to promote his father’s photo exhibition and the movie “Ernesto” (directed by Junji Sakamoto), which features Japanese descendants who fought alongside Che Guevara in Bolivia. The movie will be released in October.

When Guevara visited Japan in July 1959, as the leader of a group of delegates from Cuba’s revolutionary government soon after it was established, he also came to Hiroshima because of a strong desire to visit the city, although his original itinerary did not include this stop. In the postcard he sent from Hiroshima to his wife Aleida, he wrote that "In order to fight better for peace, one must look at Hiroshima."

Camilo said that his father often sent postcards to his family from places around the world, sharing news with them that was typically written in a wry, humorous tone. But the postcard sent from Hiroshima, he explained, was unlike any of the others and reflected the strong, shocking impression Guevara experienced when he visited this city.

Among the 240 or so photos on exhibit in Tokyo are images that Che Guevara took in the Hiroshima Peace Memorial Park in Naka Ward. Camilo said that the scenery of the park now looks different compared to what the park was like in 1959 and, in this respect, his father’s photos constitute a valuable historical record. The photos that Guevara took in Hiroshima and a copy of the postcard he sent from Hiroshima will also be exhibited in the A-bombed city.

When Camilo was three years old, Che Guevara left his family behind in Cuba and traveled to Congo and Bolivia to support the revolutionary efforts in these countries. As a result, Camilo has few direct memories of his father. However, he stressed that the photos convey a lot about his father’s life, the times he lived in and, above all, his father’s more sensitive nature. One photo, in particular, shows children smiling in a village in Sierra Maestra, Cuba. Camilo explained: “My father entered this village with a guerrilla militia that he himself was leading. The people of the village were poor and their level of literacy was low. My father built a school there and blended in with the people and worked to improve their lives. I hope viewers will feel what’s behind the children’s smiles.”

When Che Guevara visited Hiroshima, he reportedly asked a Hiroshima prefectural staff member, who was serving as his interpreter at such sites as the Peace Memorial Park, why the people of Hiroshima were not bitter about the United States, which had dropped the atomic bomb. Camilo said that his father fought tirelessly against imperialism and that his question was likely rooted in his criticism over what the United States had done to Japan and to other nations. From this account, too, Guevara’s keen sensitivity can be seen.

The exhibition of Che Guevara’s photos will continue at Yebisu Garden Place in Tokyo’s Meguro Ward until August 27, under the title “The World the Photographer Che Guevara Saw.” Some of the photos will then be exhibited in Hiroshima from September 16 to 24 at the Hiroshima Branch of the former Bank of Japan in Naka Ward.