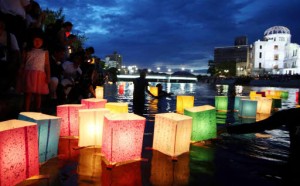 On the night of August 6, paper lanterns were floated on the Motoyasu River, which flows in front of the A-bomb Dome in Naka Ward, Hiroshima. Lights of about 10,000 paper lanterns, which were offered to comfort the souls of the A-bomb victims and pray for peace, reflected colorfully on the surface of the river.

Starting at 6 p.m., the family members of the victims, parents with children, and other participants wrote various messages on the lanterns, such as “Wishing for a world without nuclear weapons” or “May the world have no war,” and gently set them afloat on the Motoyasu River. Many people quietly watched the belt of lights, which glowed brighter as darkness fell.

Kuniko Hamano, 72, a self-employed worker and resident of Minami Ward, grieved for Satoko, her elder sister who was killed in the atomic bombing at the age of 3. “I was told Satoko had been looking forward to playing with me,” she said. Then sharing her wish, she added, “I hope a tragedy like this never ever happens again.”