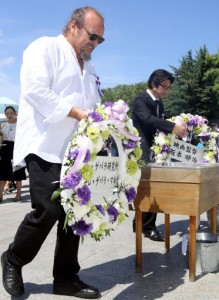 This is the first visit to Japan for Mr. Guevara, who serves as coordinator of the Che Guevara Studies Center in Havana. He is visiting Japan partly to publicize a traveling photo exhibition and a film. The photo exhibition featuring his father will open in Tokyo on August 9, with some of the items to be exhibited in Hiroshima as well. Ernest, a film directed by Junji Sakomoto, includes a scene from Che Guevara’s visit to Hiroshima. The film will be released this autumn.

Mr. Guevara and Mr. Sakamoto each laid a flower wreath at the Cenotaph for the A-bomb Victims. Mr. Guevara said that the victims can truly rest in peace only when all nuclear weapons have been eliminated.

The photo exhibition in Hiroshima will be held at the former Hiroshima Branch of the Bank of Japan from September 16 to 24. The articles on display will include an image of a postcard Che Guevara sent to his wife from Hiroshima and some photos he took while in the city.