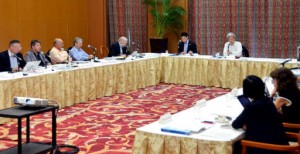 The Hiroshima Round Table, a meeting where experts discuss a path toward nuclear disarmament in East Asia, opened at a hotel in Hiroshima on August 1. The 16 participants of this two-day gathering are researchers and former foreign ministers from seven countries, including the United States, South Korea, and China, and Hiroshima Governor Hidehiko Yuzaki. An American expert on nuclear issues said that one of the virtual targets of the missile test conducted by North Korea in March was the U.S. Marine Corps Air Station Iwakuni, located in Yamaguchi Prefecture, and expressed concerns about the deteriorating situation. The Hiroshima Round Table is sponsored by the Hiroshima prefectural government.

Jeffery Lewis, the director of the East Asia Nonproliferation Program at the Middlebury Institute of International Studies at Monterey, located in the United States, made a keynote presentation on the denuclearization of Northeast Asia. In March, North Korea launched four missiles, which came down in the Sea of Japan. Dr. Lewis said that one of the virtual targets of this test was the Iwakuni air station. In making this argument, he showed a map depicting the test plan that was seen in a photo from images aired by North Korea’s state-run broadcasting station. He pointed out that the four lines indicating the missiles’ trajectories extend to the sea, and one of them is linked to the U.S. base in Iwakuni.

Given the progress of North Korea’s missile development and nuclear testing, Dr. Lewis said that the opportunity for denuclearization has already been lost and that now thought must be given to how we can live side by side with a nuclear-armed North Korea and reduce the risk of the use of nuclear weapons.

Researchers at institutions that have partnership arrangements with Hiroshima Prefecture also made presentations. Sibylle Bauer, the director of studies at the Stockholm International Peace Research Institute in Sweden, said that confidence building is vital in order to bridge the divide between the nuclear and non-nuclear weapon states over the Treaty on the Prohibition of Nuclear Weapons, adopted in July at the United Nations. She said that, as an A-bombed city, Hiroshima has an important role to play in this. John Borrie, the chief of research at the United Nations Institute for Disarmament Research in Geneva, Switzerland, said that nuclear deterrence is an idea of the Cold War era and that its legitimacy is being questioned now that the treaty to ban nuclear weapons has been adopted.

The Hiroshima Round Table is part of the prefectural government’s “Hiroshima for Global Peace” plan. The first such meeting was held in fiscal 2013, and this is the fifth meeting. After the presentations, discussions will be held behind closed doors. After closing the discussions on the second day, Mr. Yuzaki and others will hold a news conference and report on the results of their gathering.

Hiroshima Round Table
The Hiroshima Round Table is a meeting where experts from Japan and abroad hold discussions with a focus on nuclear disarmament in East Asia and arms control. The meeting seeks to make specific proposals to facilitate disarmament negotiations between nations. The chairman’s summary of last year’s meeting made such proposals as pursuing efforts for confidence building among Northeast Asian countries by holding a dialogue involving Japan, the United States, China, and South Korea.