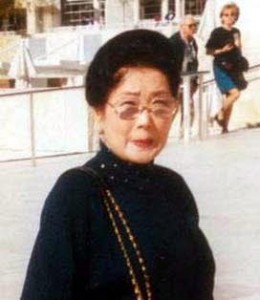 Eiko Fukushima, 86, a resident of Los Angeles, California who experienced the atomic bombing of Hiroshima, has begun sharing her A-bomb account with people in her local community. Ms. Fukushima made notes about her experience last year in response to the visit to Hiroshima by former U.S. President Barack Obama and concerns over North Korea, which has been aggressively developing its nuclear weapons. She has come to feel strongly that A-bomb survivors, including herself, must share their experiences in person to convey the horror of nuclear arms to others and hand down their memories to future generations.

Ms. Fukushima was 14, working as a mobilized student at a Mitsubishi Heavy Industries plant in Minamikanon-machi (now part of Nishi Ward), when the A-bomb attack occurred. On her way home, which was located in Ujina-machi (now part of Minami Ward), she passed by wounded survivors who held out their hands to her and pleaded for water. For a week, she slept outside in a park.

After the war, she married a second-generation Japanese-American and moved to the United States in 1956. There, she would hear some Americans say that the A-bomb attacks helped bring the war to a quicker end. She didn’t actively admit that she was from Hiroshima until she left her job doing sewing work at a department store when she was 77 years old.

She was impressed by Mr. Obama’s visit to Hiroshima in May of last year and the fact that he showed sympathy for the A-bomb survivors. So, in July, she made notes on her horrific experience and shared her account for the first time. She said that talk, with Americans who listened keenly to her story, made her realize how important it was to speak out.

Ms. Fukushima also worries over North Korea’s missile launches and the Trump administration’s desire to strengthen the U.S. nuclear arsenal. She said, “The only thing I can do now is talk about my experience, but I think this is the best way for other people to understand how terrifying nuclear weapons are.” She is determined to continue seeking out opportunities to share her experience.