Five aircraft arrive at U.S. military base in Iwakuni in first wave of carrier aircraft’s relocation 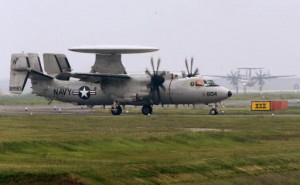 On August 9, five E-2D early warning aircraft arrived at the U.S. Marine Corps Air Station Iwakuni, located in Yamaguchi Prefecture. This is the first wave of the carrier aircraft relocation from the Atsugi Naval Air Station in Kanagawa Prefecture to Iwakuni. In all, 61 airplanes of four types are scheduled to be transferred to Iwakuni by May 2018. After the transfer is completed, the number of airplanes stationed at the Iwakuni base will have doubled to about 120, exceeding the roughly 100 aircraft at the Kadena Air Base in Okinawa and becoming one of the biggest U.S. air bases in the Far East.

On this day, the E-2D aircraft took off from the Atsugi base. Four of those airplanes arrived at the Iwakuni base between 12:12 p.m. and 12:17 p.m., and the last airplane landed at the base at 1:49 p.m. Both Tsugumasa Muraoka, the governor of Yamaguchi Prefecture, and Yoshihiko Fukuda, the mayor of Iwakuni, expressed their regret for the fact that the relocation of aircraft began on the anniversary of the atomic bombing of Nagasaki.

In line with the plan by the U.S. government, after the relocation of E-2D aircraft is carried out, a total of 48 fighter/attack planes known as F/A Super Hornets, which are the primary source of intense noise, will also be relocated to the Iwakuni base in November 2017 and May 2018. In addition, around January 2018, six EA-18G Growler electronic warfare aircraft and two C2 transport aircraft will be transferred as well. Along with these aircraft, about 3,800 people, including service personnel, civilian employees, and family members, will move to the Iwakuni base. As a result, the number of U.S. military personnel at the Iwakuni base is likely to top 10,000.

On August 4, the U.S. government informed their Japanese counterpart that five E2-D aircraft would begin to arrive at the Iwakuni base from around August 6. However, in order to avoid the bad weather surrounding the Iwakuni base due to the approaching Typhoon No. 5, the airplanes flew from the aircraft carrier to the Atsugi base on August 6 and 7.

Planned relocation of the U.S. carrier aircraft to the Iwakuni base

E-2D early warning aircraft
This U.S. Navy airplane was developed by the Northrop Grumman Corporation and has the capability to pinpoint locations across a broad area. On the upper part of the plane’s body is a disk, about 7.3 meters in diameter, with state-of-the-art radar and a system for gathering a variety of data. This data can be shared with other military units, including fighter planes, warships, and ground troops. The E-2D early warning aircraft succeeds the E2C, the aircraft stationed at the Atsugi Naval Air Station, and had come from the Norfolk Naval Base in the U.S. state of Virginia to the Iwakuni base in early February of this year for “training prior to deployment.” Following the three-month training period in Iwakuni, to acclimate to airspace management and ground control, the planes have been assigned to the aircraft carrier Ronald Reagan.