Hiroshima Round Table closes, proposes conference be held in Hiroshima for nuclear abolition 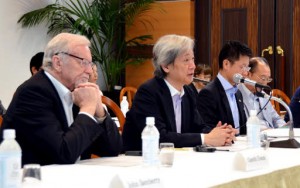 The Hiroshima Round Table, a meeting to explore a path toward nuclear disarmament in East Asia, closed after holding a plenary session on August 2. Researchers from Japan, the United States, China, and four other nations held closed-door discussions during this two-day meeting organized by the Hiroshima prefectural government. In a news conference held after the meeting, the participants proposed that an international conference be held in Hiroshima. They said that the nuclear nations and their allies that depend on the “nuclear umbrella” should come together in the A-bombed city and discuss specific steps for advancing the abolition of nuclear weapons.

Gareth Evans, a former foreign minister from Australia, said that Japan and Australia should call on the nuclear powers and their allies to take part in the conference in Hiroshima, where they should discuss reducing the number of nuclear weapons deployed or possessed and institutionalizing the policy of no-first-use of nuclear weapons. Mr. Evans said the non-nuclear nations are becoming increasingly dissatisfied that the process of phased disarmament, which is advocated by the nuclear powers, is not showing signs of progress. He stressed that the nuclear weapon states and their allies must demonstrate their commitment to nuclear abolition. He also said that the conference in Hiroshima should be held within 18 months in order to yield productive results before the next session of the Review Conference of the Treaty on the Non-proliferation of Nuclear Weapons Preparatory Committee, which will take place in three years.

Kiichi Fujiwara, a scholar of international politics and professor at the Graduate School of the University of Tokyo, presided over the meeting. He said that discussions were focused on the view that nuclear weapons must never be used again. He reported that the participants discussed how to address concerns involving North Korea, which has been advancing its nuclear and missile programs, and how to overcome the idea of nuclear deterrence. The contents of the discussions and proposals will soon be released in the chairman’s summary.

The prefectural government held a public symposium at the International Conference Center Hiroshima on August 2. The participants of the meeting exchanged views on the theme of a security framework that would not depend on nuclear weapons.