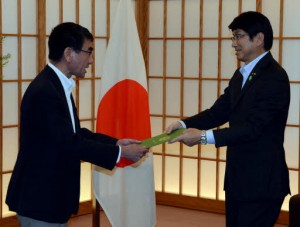 On August 23, Mayors for Peace, for which Hiroshima Mayor Kazumi Matsui serves as president, submitted a letter for request to Prime Minister Shinzo Abe, urging the Japanese government to do everything possible to strengthen the effectiveness of the Treaty on the Prohibition of Nuclear Weapons. The letter was handed to Foreign Minister Taro Kono by Nagasaki Mayor Tomihisa Taue, the vice president of Mayors for Peace, who paid a visit to the Ministry of Foreign Affairs.

Mr. Kono said that he would do his utmost to advance the goal of nuclear abolition. He also made it clear that on August 17, during a visit to the United States, he urged the U.S. government to make efforts to ratify the Comprehensive Test Ban Treaty (CTBT).

Apart from the beginning of their meeting, Mr. Taue met with Mr. Kono behind closed doors. With the Japanese government’s stance of not signing the nuclear weapons ban treaty in mind, Mr. Taue told reporters that Japan can participate in meetings of signatories to the treaty as an observer. He also expressed hope that the government will consider its approach based on how the treaty can be used as a means to abolish nuclear arms.

Nobuto Sugiura, the head of the City of Hiroshima’s office in Tokyo, accompanied Mr. Taue during his meeting with the foreign minister.