Exterior of Gates of Peace, donated by French artists, in need of repairs 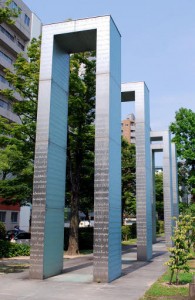 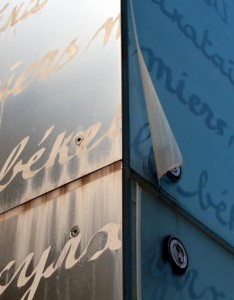 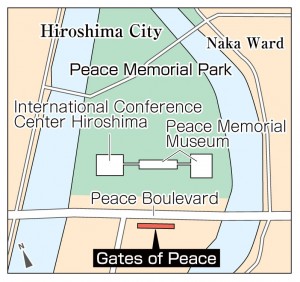 The exterior surfaces of the Gates of Peace, monuments that stand in a greenbelt on Peace Boulevard, located in Naka Ward, are fraying. The gates were created by a French artist and a French architect on the south side of the Hiroshima Peace Memorial Park and were donated to the City of Hiroshima on July 30, 2005, the 60th anniversary of the atomic bombing. Exposed to the elements, the protective sheets on the surface of the gates have begun to peel and the structures are becoming grimy. The City of Hiroshima has made use of funds that were left over in its budget to undertake certain repairs, but more repair work is needed.

The Gates of Peace consist of ten glass gates that are 9 meters high, 2.6 meters wide, and 1.6 meters deep. They represent the nine circles of hell from the poem The Divine Comedy by the Italian poet Dante Alighieri, as well as the new hell created by the atomic bombing. The gates stretch 75 meters east to west in parallel with the columns on the north side of the main building of Hiroshima Peace Memorial Museum. The word “peace” has been translated into 49 languages and is inscribed on the surface of the gates. At night, the gates are illuminated and the words glow in the darkness.

With a prayer for peace in the world, the gates were created by a graphic artist and an architect, both French natives, and funded by Japanese and French companies and other organizations at a cost of about 300 million yen. Twelve years have passed since the gates were installed, and the corners of the transparent protective sheets affixed to the surface are peeling due to wind and rain from typhoons and some sheets have bubbled as a result of air entering inside. These effects, however, have no structural impact on the gates themselves.

In March, the City of Hiroshima peeled off 11 of the most heavily damaged sheets, among the total of 160 sheets, and affixed new ones in their place. The cost of these repairs, including the expense of performing work at a significant height, was about 1.3 million yen. A staff member in the city’s Peace Promotion Division said, “There are still several more sheets that are badly damaged. We’d like to repair them.” The division plans to appropriate funds that are left over from the current year’s budget to pursue these repairs, too, but this will not be enough to make all the needed repairs. Earmarking funds for this purpose in the budget for fiscal year 2018 is now being considered.

Many visitors to the city take photos of the Gates of Peace. One travel agent said, “Showing the Gates of Peace in this state is impolite to the people from the country that donated them to us. The city should repair them appropriately and promptly.” The staff member of the Peace Promotion Division added, “A donation like this mustn’t be left in a shabby condition. The Gates of Peace stand in front of the Peace Memorial Park, and help welcome visitors to the city. The repairs are funded by money from taxpayers, so we want to be cost-effective as we carefully consider our next steps.”