Violinist from Russia serves as bridge between Volgograd and Hiroshima 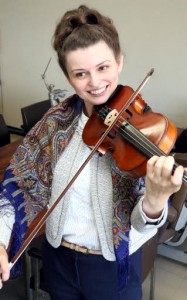 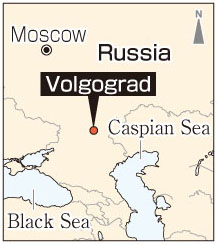 Hiroshima and Volgograd, a Russian city located on the west bank of the Volga River, will mark the 45th anniversary of their sister city relationship this year. Ekaterina Simakina, 32, a violinist from Volgograd who now lives in Asaminami Ward, has been lending personal support to the exchange efforts between these two cities.

In January 2016, Ms. Simakina became a “Hiroshima Messenger.” This is a role designated by the City of Hiroshima to help carry out exchange activities with Hiroshima’s sister cities and friendship cities. In this capacity, Ms. Simakina visits elementary schools and introduces aspects of Russian culture to the students. In September, she will hold an event in Naka Ward to commemorate Volgograd Day. A concert by young Russian musicians, and a photo exhibition, are also on her agenda for this year.

Ms. Simakina was born in Volgograd during the Soviet era. When she was eight years old, her life took a turn. One day in 1992, the year following the collapse of the Soviet Union, an adult came to her school and checked the students’ hands, including her hands and the hands of her classmates. As a result, it was recommended that she play the violin, perhaps because of her long fingers, and she began attending a music school.

She went on to the Volgograd State Institute of Arts and Culture, majoring in the violin, where she practiced intensely. In particular, she often played pieces by Russian composers, such as Sergei Rachmaninov and Sergei Prokofiev. In 2008, in response to a friend’s invitation, she came to Japan and earned a living by playing her violin in restaurants and pubs. For her, everything in Japan, including the language, foods, and customs, was different from what she was used to in Russia. Though she had expected to soon return there, she ended up marrying a Japanese man in the summer of 2012 and settling down in Hiroshima.

The people of Russia, a nuclear superpower, are familiar with the name of the city known as Hiroshima. But her visit to the Peace Memorial Museum was the first time she recognized the tragic reality that took place under the mushroom cloud when the city was attacked with the atomic bomb. Seeing the belongings left behind by children who perished in the bombing, Ms. Simakina wondered why such little angels, who knew nothing of the war or bad blood between people had to lose their lives. She said that her eyes filled with tears and that the tragedy of Hiroshima overlapped with the sorrows of her own hometown, which she had heard about since she was a child.

The tragedy of Volgograd came about as a result of the Battle of Stalingrad, a historic battle in Russia’s past. Volgograd was once known as Stalingrad, named after Joseph Stalin, the former Soviet leader. In the summer of 1942, Nazi Germany invaded the city and it was then ravaged by bombings and gunfire until February 1943. The death toll from the fierce fighting is estimated at 1 million on both sides, including the lives of many civilians.

“The city was turned into ruins and every family lost a loved one,” Ms. Simakina said. Her great-grandfather took part in the battle, too, and received a medal for his efforts to treat 400 of the wounded. But he was finally killed in the fighting at the age of 34.

Ms. Simakina said, “The victims should have lived longer and enjoyed their lives more. Hiroshima and Volgograd are the same in the sense that both cities experienced utter destruction and many of their citizens were killed.” She feels she was destined to serve as a bridge between the two cities, both of which hold tragic memories, after reaching her 30s, around the same age as her great-grandfather.

Today, Ms. Simakina is busy raising her 3-year-old daughter, but she hopes to return to her music in the future. She said, “We’re now surrounded by a flood of information. Under these circumstances, I think it’s important that we educate people who can understand various values and cultures.” Toward this end, she would like to make the youth exchanges between Hiroshima and Volgograd more active in music and the arts.